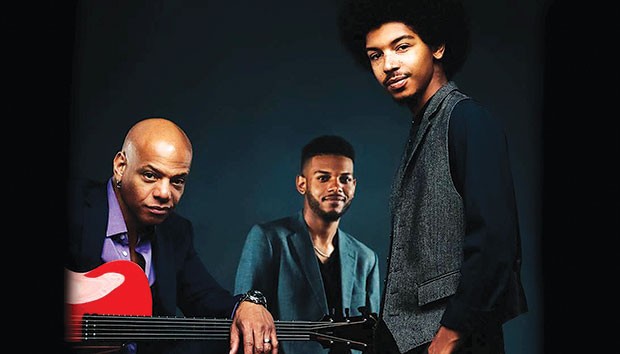 With Mark Strickland. 7:30 p.m. Fri., March 10. Kelly-Strayhorn Theater, 5941 Penn Ave., East Liberty. $30. 412-363-3000 or kelly-strayhorn.org
“The Socrates Curse,” on Mark Whitfield’s new album Grace, features the guitarist’s rapid-melody lines getting extra drive from his taut rhythm section. The group dynamic hints at a long-standing relationship between the players, which is accurate in a way. But Whitfield has a different connection to the pianist and drummer. His 26-year old son, Mark Jr., sits behind the kit, with 24-year-old son, Davis, handling the piano. (Bassist Yasushi Nakamura rounds out the quartet.)

In some ways, the younger Whitfields could be considered musical veterans like their 50-year-old father. Mark Jr. showed potential as a toddler, and performed with dad at age 4. Davis didn’t begin quite as early, studying piano in third grade, but he now plays with the authority of someone like McCoy Tyner. Both came to jazz naturally. “I never felt like music was something I should force on them,” Mark Whitfield says from his New Jersey home. “I always approached it as something we could share. I think that attitude helped foster a healthy appreciation for jazz music and for what this life has to offer. And from that point on, we just do what we do.”

Whitfield — who has played with everyone from Herbie Hancock to Dave Matthews — grew up at a time when there was still a chance to play with musicians from what he calls the “golden age of jazz.” A friendship with guitarist George Benson helped him land a spot with legendary organist Jack McDuff, who taught him some old-school lessons. If McDuff wasn’t impressed by a musician’s solo on a tune, he wouldn’t let him solo in the next song. “He fired me every night for the first two months,” Whitfield recalls of his time with the B3 master. “That kind of trial by fire is what fosters the improvement that I sometimes don’t hear [in younger players].”

While he hasn’t been as brusque as McDuff, Whitfield believes in putting musicians in situations that help them grow as players. “Rather than me walking by [their] bedroom or the practice room and saying, ‘Do this,’ [I told them], ‘I’m going to put you on the bandstand with us tonight, and you’ll hear it for yourself.’ That’s how I developed, and I’m fortunate enough to have had the opportunity to share it with them.”

Their upcoming performance bills them as the Whitfield Family Band, and Grace proves that nepotism has nothing to do with it. It’s all about the musical rapport, something that can be elusive for any player. “When you finally find yourself in the position where … all of a sudden you develop an unspoken language [with your band], whether someone is interjecting a chord or a melody that causes everyone to make a collective left turn or right turn, or make you say, ‘Man that was awesome,’ that’s very reaffirming,” he says.

Whitfield also learns a good deal from his kids. “They constantly turn me on to new styles, new artists, new concepts, not so much in jazz but in music in general,” he says. “It helps us maintain a creative dialogue.”