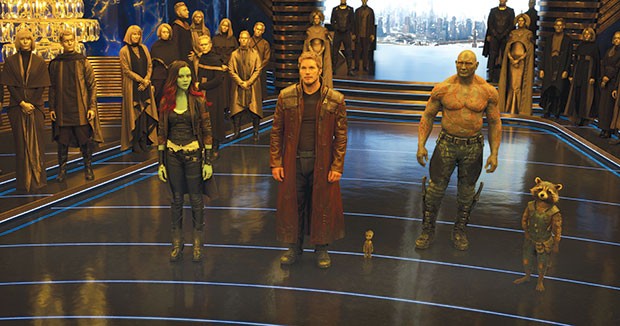 James Gunn’s 2014 film was a comedic action-adventure that combined a simple quest with goofy characters, gags and cheesy 1970s pop songs. It was a space epic that cheerfully shrugged “whatever.” That remains a fair description of Vol. 2, though everything now feels slightly less fresh and decidedly more calculated. For instance, the tossed-off nature of Vol. 1 wouldn’t have bothered with such formulaic elements as a very special emotional journey or a super-long CGI blast-o-rama, both of which burden the final reel of Vol. 2. If you loved Vol. 1, you’ll probably like Vol. 2. Conversely, if you liked Vol. 1, but thought it needed more tears and exploding planets, you’ll love Vol. 2.

We reunite with our ragtag crew — spaceship pilot Peter Quill (Chris Pratt), assassin Gamora (Zoe Saldana), muscleman Drax (Dave Bautista) and a talking raccoon named Rocket (voice of Bradley Cooper) — while they are deep in a battle to protect some expensive batteries from a gigantic octopus. Or something. It doesn’t really matter, because (1) obviously the stars of the movie will triumph in this opening battle; and (2) while the adults fight ginormous tentacles of death, everybody in the theater is busy watching Baby Groot — a tiny anthropomorphic tree — shake his wee twigs to ELO’s “Mr. Blue Sky.”

The primary narrative concerns Quill reuniting with his previously unknown bio-dad, who turns out to be an upbeat, attractively human-shaped non-human called Ego (Kurt Russell). Ego has his own planet — naturally — and it’s got a certain relaxing Maxfield Parrish vibe. It all adds up to be too good to be true. And because outer space is no respite from family dramas, Quill’s adoptive father, the cranky ravager Yondu (Michael Rooker), also has something to say. There are a couple of other subplots that double down on “we are family,” and some set-up involving a planet of gold people that will undoubtedly drive Vol. 3. (There are five teaser scenes during the end credits and two Stan Lee cameos.)

But fans should get their money’s worth with an assortment of jokes, special effects and lots of Baby Groot. And silly love songs. The film’s title references the second mixtape that Quill’s mom left him, and it’s the source of the film’s 1970s tunes. Tolerance for this gimmick may vary, but there is no corner of the universe in which Glen Campbell’s “Southern Nights” adds any cachet.