No news here: This sequel is just as unfunny and puerile as its precedessor 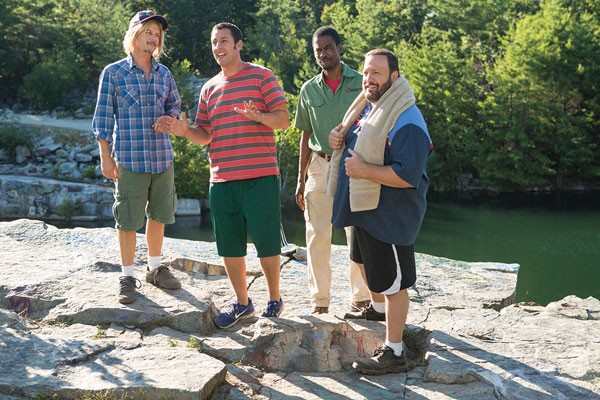 To save time, here's my review of 2010's Grown Ups, updated for the sequel: Here are five four guys I'd rather not know: Adam Sandler, Kevin James, Chris Rock, Rob Schneider and David Spade. Because if they think this movie is funny — and admittedly, they at least look like they're having fun making it — then we have nothing in common. In Dennis Dugan's PG-rated comedy, these five play junior-high buddies, now in their 40s, who reunite for a holiday weekend at lakeside cabin live in the same town. Apparently, 40 is the new 10, because these guys are non-stop with the stupid insults; the poop-and-pee jokes; the giggling awkwardness about sex; and the unabashed ogling of young women. Sandler and Co. try and cover for this juvenile mess by having some aw-shucks subplot about the old-fashioned joys of just hanging out with friends and family sans fancy toys and high-tech distractions. Because, apparently, nothing is as truly bonding as peeing in the kiddie pool, and thinking it's funny. [New, but unwanted, for the sequel: deer piss, guy crotch shots, Shaquille O'Neal and The J. Geils Band.]