When last we met, I think I was around 5 or 6. You had just given me a kiss on the cheek as a hello and, in my precocious way, I wiped it away. (I’m sorry, but you laughed!) We were at the WQED studios to be photographed for one of the episodes my brother Anire and I appeared. You then went on to mispronounce my name, “Tair-Ron-A” rather than “Tair-An-A,” but, in typical Mister Rogers fashion, I think your version is closer to the original Farsi.

I am hedging a bit here because what I have to say isn’t easy. America has become even more horrible since you left. A lot of people are trying to cope and figure out what to do next by turning back to early lessons, books, food, music, and media. I turned to you.

It got me thinking about what is it like to grow up Black in Mister Rogers’ Neighborhood and what it is like to be Black now in your ’hood.

As a child, the most important lesson I learned from you is that I am special. Sitting on the floor crossed-legged in front of the TV, slowly silently repeating the words you just said to me through the screen, “I am special.” It felt wonderful hearing that for the first time.

I took it to mean that everyone is special; we all deserve to be celebrated, cared for, and loved in a special way. But it didn’t take long to realize others heard the same words and interpreted them very differently than I did.

Some of the children around me and their parents felt it meant that their children were special. Period. Full stop. That they were special. Period. Full stop. It wasn't meant for anyone else. Especially not for a little Black girl. In a hierarchical society, if someone is special that means someone must not be. Or as one of my high school teachers said to me, “Actually no one is special at all, it is a lie.”

So you can imagine growing up thinking everyone is significant or beautiful in their own way, while others say, “No, actually only some people are special.” How do we know who are the special people?

Well, that’s where I found you after all. But the TV also told me that the special people, the ones who are the superheroes or the hosts of TV shows, are more than often young and white. The ones who tell us the news, make laws, or break them with impunity; they are mostly old, white, and male.

Once I was in high school, I saw it for myself. I saw the difference in the way Black children were talked to or punished. My white friends bragged about shoplifting at fancy stores because “no one would suspect them.” Not me, though. The people at those stores would follow me hard with their eyes and sometimes just follow me around the store. I would love to say that it doesn’t happen today, but it does. Sometimes it’s just a subtle sign that reads “Leave your bag at the door.” But if the same store in a different neighborhood doesn’t have that sign, are those folks better? Special? It sure seems so.

As a child, you also told us to “look for the helpers.” But how do we identify them? I’ve learned that “Officer Friendly” is not friendly after all. Even as you were beginning your TV show, Freedom House Ambulance services began in 1967 in the Hill District, in part because of the still discriminatory medical practices in the region, when Black people died because white-owned ambulances wouldn’t come to Black neighborhoods.

And as scary as the news was when I was a child, it is worse now. Even more wars, the climate crisis, loss of human rights in America, and a reduction of our already lacking democracy, to name just a few.

So how does a Black child look to helpers who cause harm? What happens when you see children who look like you being hurt by those sworn to help?

I understand, Mister Rogers, that, as an adult, I am the helper now. It is my job to be a helper, and I try my best. But the load is a heavy one when so many adults are looking for someone else to fill that role. When on the verge of total democratic collapse, people are arguing about whether it is worth helping someone live, if it may mean they get arrested or worse.

We grew up wanting to be Jedi rebels but now many of us are being fitted for StormTrooper uniforms.

Mister Rogers, I wish there were other supporting systems and examples of what you talked about. The sad thing is that many people in Pittsburgh think they live in Mister Rogers’ Neighborhood, a loving city full of special people, and they do not listen to anyone who says otherwise.

Get ready for the new Mister Rogers movie with Joy Ike's cover of "Won't You Be My Neighbor?" 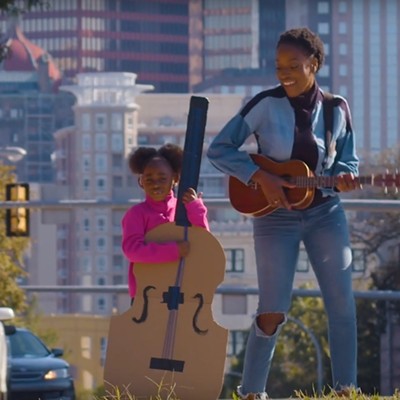