"This is all a dumping area. Everybody dumps," says John Nicholas as he picks up litter in an empty lot in Homewood on May 31.

"I just pulled out a muffler," calls Brian Funk, his partner in cleaning, from behind a bush.

The two are working on a Saturday morning -- the ground still wet from an earlier rain -- to undo the cumulative effects of littering and large-scale dumping that have spoiled the neighborhood.

Cleaning up this lot provides an immediate aesthetic boon -- especially for Nicholas, who lives across the street from it. But in a larger sense, Funk and Nicholas are trying to instill a sense of pride in an area that has been repeatedly victimized by disregard.

"We just keep doing the small things because that adds up and that shows care," Funk says.

In the tall grass behind the paved lot, he discovers bottles and trash, a deflated basketball. There's an abandoned Buick with stripped plates that Nicholas has reported to be towed earlier that week.

"This has been going on for years," Nicholas says. "This is not just today."

Funk and Nicholas -- Homewood and Penn Hills residents, respectively, although the city and the borough share the same street -- have a few clean-up projects going on in the area.

They're working with the East Tri-Borough Neighborhood Association, a group that Nicholas co-founded, to transform the corner of Madonna and Bricelyn streets from a wooded target of illegal dumping into a communal garden.

After trimming back a tangle of weeds and thickets, the ETBNA pulled out evidence of illegal unloading, including railroad ties, bricks and concrete. They used the refuse to set up three flower beds on the corner.

"Hopefully the next time that person drives by the corner and sees it clean and cut, they'll think before they empty their ashtray on the corner," Funk says.

Behind the garden there's a recess in the trees where dumpers have previously dropped construction waste. To get to it now, they'd have to run over a patch of flowers or come in from the top, on Madonna Street.

The property and some services were donated by George's Transmission, which borders the woods on Frankstown Avenue. In some places, the trash is partially buried or covered in overgrowth.

The work is unglamorous by nature -- digging up waste that's been tossed aside or recklessly plopped into overgrown weeds -- but its location doesn't help any: Frankstown Avenue marks the border between Pittsburgh and Penn Hills, with each side of the street belonging to a different municipality in some places. That makes it hard for residents to know whom to contact.

"When you call the city, they get contentious," Funk says. "They say, 'That's Penn Hills.'"

Of course, the responders have troubles, too. Wayne Bossinger, the field operations manager for Pittsburgh's Bureau of Building Inspections, says that going after dumpers can be difficult because "a lot of times they do this at the end of the day or at night."

In order to cite a dumper the city needs an eyewitness. In some of the most egregious cases, the culprits appear to be contractors leaving behind doorframes and cinderblocks to avoid hauling and dumping fees.

"It saves money and saves some time," Bossinger says, noting that legal dumping fees have gradually increased in the area.

"It's cheaper than going to a dumpsite and going out of their way and paying," agrees Laverne Stuckey, a code inspector who works in the neighborhood.

Bossinger says the situation is worst in neighborhoods where there's a concentration of vacant buildings and lots -- as opposed to, say, Squirrel Hill, where "there's a lot of eyes but few vacancies."

He also adds that some people refuse to testify as witnesses because they fear retaliation or would not be able to take a day off from work.

Funk describes it as a complex problem that extends beyond Homewood.

"Everyone's concerned [here] because no one wants to live in a dump," he says. "But a lot of people are one, scared or two, hopeless. ... It's all over the city and it's all over the nation. It's not just Pittsburgh."

Less than half a mile from the garden clean-up, at 8434 Frankstown Ave., there's a particularly ugly plot of land. Next to an empty storefront, a driveway leads down a hill and out of sight from the road.

The trash gets larger and larger as the alley descends, ending in an ankle-deep pile of garbage that spreads out in a 20-foot radius.

"This is bad news," Nicholas says as he walks down. "[The owner] had this clean at one time, probably a year ago."

"This stuff is dumped by a truck," Funk adds.

In the pile there are doors, rolled-up carpeting, children's toys and paint buckets. There are probably dozens of tires, some scrap wood and car parts.

"Yes, where they dump those tires," inspector Stuckey responds knowingly when asked about the area. "Yes, that's a mess."

She agrees with Bossinger that it's hard to get witnesses to come forward sometimes.

She encourages residents to call 911 if they see anyone dumping garbage in their neighborhoods.

"I wish I could go to the dumpers," she says. "I need a witness to say, 'I saw someone dump there.' So ultimately, it's on the owners."

On May 2, Stuckey cited the owner of 8434 Frankstown Ave., Carol Borandi, for having overgrown weeds and "30 or more tires, wood, debris, rugs and furniture" on her property. According to the citation, she had 15 days to correct the violations.

Anthony Givner, the Public Works foreman for the district, says the matter has been referred to the city's law department. From there it will likely move to a magistrate judge.

Borandi says a tenant of hers witnessed a truck -- with the name of a local hauling company on its side -- dumping items in the driveway. She had a lawyer send a letter to the truck's owners, but has yet to receive a response. She's attempting to get the city to hold the alleged dumper at least partially accountable.

"Why should I have to pay for this?" Borandi asks. "I know it has to be cleaned up no matter what ... but [people are] just going down there and dumping. It's not right."

Borandi says she's going to get a Dumpster down there soon, but having been victimized more than once by illegal dumping, she knows there's more work ahead than just picking up the trash.

"Once I get everything cleaned up, I'm going to have to do something. I don't think 'No dumping' signs are going to help down there," she says. 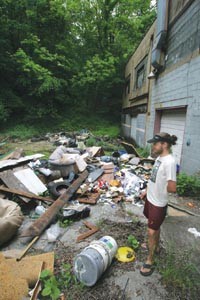