Soldiers, civilians and even empty rooms are among the photographers' subjects. 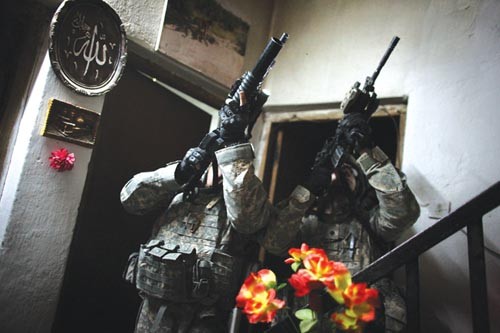 Courtesy of the artist and with permission from Michael Shaw, BagNewsNotes
Michael Kamber's "Soldiers on patrol in Iraq" (2008), a still image from the video Military Censorship (2010)

War is a sensitive topic. Witness the decade past, in which calls for caution -- or even fact-checking -- have sometimes been derided as traitorous.

So you've got to respect the curators of HomeFrontLine, Silver Eye Center Executive Director Ellen Fleurov and independent curator Leo Hsu. They're willing to take on the effects of the wars in Afghanistan and Iraq 10 years after the 9/11 attacks politically enabled American military responses. The work of the 11 photographers represented reflects an engagement with the details and dramas and tragedies of war. There are no iconic images here.

Addressing the complexities of war through an exhibition of a modest number of images is daunting. Moreover, while the reality-based photojournalism and documentary photography that makes up this exhibition is always specific, the challenge of tackling a contentious theme requires not only a narrative framework but a point of view as well, while avoiding tendentiousness.

Fleurov and Hsu (the latter an occasional CP contributor) pursued an expanded form of history-telling. They have virtually avoided soldiers-with-guns depictions and instead focused on the effects and rippling after-effects of the two wars. Such effects range from the expanded militarization of recruitment and training to life on the front lines and the lingering damage to American soldiers and their families, as well as to Afghan and Iraqi civilians.

This is not an easy exhibit to grasp. While the photographs in HomeFrontLine are essential evidence in which much is depicted, much is also implied or ambiguous. Interpretation, meanwhile, requires lots of information, fortunately provided on the exhibition labels, and lots of thinking.

Whatever the limitations of photographs we've seen elsewhere of Soldiers With Guns, or Wounded or Newly Captured Prisoners, we readily get the point. By contrast, to begin to understand Ashley Gilbertson's "The bedroom of Army Private First Class Karina S. Lau, 20, …," which appears to be just another teen-ager's bedroom, we need to read that she was killed in Fallujah, Iraq. However, that still doesn't attempt to explain what brought her into the military, or what brought the military into Iraq. Similarly, Baptiste Giroudon's uneventful "Afghan TV journalist …" leads me to ponder the fate of civilians in these war zones, including their attempts to maintain remotely normal lives with hopes and dreams.

While the Afghanistan and Iraq wars are not generally depicted as scenes of battle in HomeFrontLine, violence and danger are close at hand. Benjamin Lowy's photographs, shot through the window of a Humvee, capture a tunnel vision in which bridal gowns surreally coexist with battlements. Lowy's other series here, of scenes photographed through night-vision goggles, suggests "the fog of war," with its muddle of civilians and suspected insurgents encountered in a confounding atmosphere of menace. And then there's the collateral damage of possible mistaken-identity detainees in Alfonso Moral's "Freed -- Faces of Guantanamo."

Included in the exhibit is a selection of slideshows with voiceover that explore issues of representing war. Peter van Agtmael's "2nd Tour: I Hope I Don't Die" concerns the practice of officially embedding a photojournalist with troops, altering soldiers' behavior while threatening the journalist's independence. In audio accompanying his "Military Censorship," Michael Kamber runs down a growing list of off-limits subjects -- car bombs, hospitals, morgues, prisoners, wounded soldiers, detainees -- though Kamber believes both that the public needs to see these things and that we eventually will, even if long after the fact. Eugene Richards' "War Is Personal: a Chronicle of the Human Consequences of the Iraq War" portrays dead and wounded American soldiers within the context of their families and loved ones and the toll that it takes on them.

Some of the works acknowledge that some soldiers do very bad things. Van Agtmael's photographs of soldiers' graffiti, for instance, include an ironic apology for killing a civilian, while the "2nd Tour" slideshow includes a voiceover of war correspondent Michael Herr discussing blood lust. But overall, HomeFrontLine comes down squarely on the side of soldiers as typically courageous and self-sacrificing, heroic of deed if unmindful of the political agendas in which they're entangled. If you draw a connection between Claire Beckett's oh-so-young soldiers and Eugene Richards' photographs of amputees and grieving families, it's enough to break your heart.

HomeFrontLine steers clear of grandstanding of both the condemnatory and jingoistic varieties. But there does appear to be a subtext: that because the true cost of war -- in terms of military and civilian casualties, political instability and money unavailable for other needs -- is so vast, the time to think about and vigorously debate a war is before it starts. Some may call that treason, but 10 years out it looks like responsible, moral democracy.