Grounded in Victory: Obama grassroots infrastructure proved to be the difference-maker 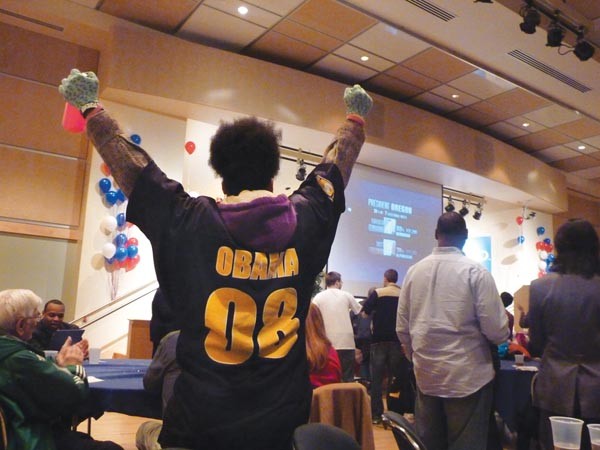 Sheronda Terry has always carried with her the gravity of a statement her father once made.

"I remember him telling me, 'We're never going to see a black president,'" she said. "I didn't know the magnitude of the statement at the time."

But then in 2008, Barack Obama was elected, and voters like Terry were even more inspired to get involved. "The last election gave me a lot of hope. I never cared before who the president was going to be."

That energy carried over to Election Day 2012 for Obama, and for Terry, who had driven her two brothers and father to vote at Corpus Christi Church in Lincoln-Lemington. Before her oldest son left home for the day, she ensured that he too cast his ballot. And she sent her other son, a freshman at Clarion College, an absentee ballot.

"It starts at home," Terry said. "I want them to be engaged."

Leading up to the election, questions swirled about whether voters like the Terrys would turn out again in 2012. Would the robust Democratic ground game that carried Obama to the White House in 2008 be as effective this time around?

As hundreds of Obama supporters watched election returns come in at South Side's IBEW Hall, the answer was easy to come by. One by one, television networks called the race for the president. Each announcement brought raucous celebration from the people on the ground who made it happen. One woman in an Obama jersey embossed with the number 08 on the back jumped on a table, shouting, crying. Another woman shook with excitement. High-fives, hugs, were exchanged all around.

The answer was crystal clear.

"This was a grassroots effort," U.S. Rep. Mike Doyle (D-Forest Hills) shouted from the stage to thunderous applause. "This was won from the bottom up. This was done door-to-door. This was done by people — working, middle-class people."

While Obama won by a narrower margin then he did in 2008, in many ways, the campaign bested 2008's ground game. Obama volunteers — according to campaign figures — registered 1.79 million voters in key battleground states, nearly double the amount in 2008. In Pennsylvania, 117,786 new Democrats had registered since May, compared to 62,500 Republicans, according to the campaign. And on Election Day, volunteers knocked on seven million doors.

While the ground game was robust in 2008, officials like campaign manager Jim Messina called the 2012 effort "historic."

"The reason [supporters] were motivated to do this wasn't because of any ... product we gave them or some analytical tool," Messina said on a Nov. 8 conference call with reporters. "They were working to build this campaign because they believed in Barack Obama and his message, and [in] the policies that he moved forward.

"That's what won in this election."

At the polls, the campaign's former message of "hope and change" was a quiet undertone to more pragmatic issues. For Terry, health care and the economy were issues affecting her family, which uses some public assistance. Terry's mother passed away this year.

"I thought when you get sick, you go to the hospital and they take care of you," she said. "But my mom ran out of money."

For Michael Catunis, of East Liberty, the promise of better jobs, better schools and environmental policy earned Obama his vote for a second time.

"I've got kids going into college. I don't want to waste money in college if it's not going to lead to a job," he said.

Lois Lining, an 86-year-old resident of Homewood House, proudly was in line at 6:55 a.m. with her voter-registration card.

In fact, each of the voters that City Paper talked to at the polls had his or her own reasons for voting on Nov. 6. But regardless of what brought voters out, it was the large turnout itself, observers say, that pushed Obama to victory. And voter turnout was a linchpin of the Obama ground game.

If the Obama campaign showed what a strong ground game could do, Mitt Romney's effort and the eventual result showed the other side of the coin.

Republicans waged a ground game, but "they chose the wrong states to do it in," says Gerald Shuster, a political-communications professor at the University of Pittsburgh. And in states that mattered most, like Ohio, the Obama campaign maintained a stronger presence, with 131 campaign offices in that battleground state compared to 40 offices for Romney, according to an analysis by the San Francisco Chronicle.

And what's more, Shuster says, Republicans failed when they "wrote off some key elements of its [constituency]" and got shrouded by the perception the party only identifies with and caters to the "white male, middle 50s."

Obama campaign officials say that was the plan all along. The campaign left much of its ground-team infrastructure in place from the last election.

"In 2008, we had field offices left and right, and we were trying to organize them," says Allison Zelman, the campaign's Pennsylvania field director. This time around, volunteers could be more effective because the tools were already in place. "Every volunteer was so much more productive and we were able to register so many more people."

That gave volunteers more time to talk about the issues and policies that the president had already put in place, which helped mobilize the voting base.

"We talk about health care. We talk about education. It's not just hope and change — you can't do that this time," she says. "You have to knock on doors and say, 'I want health care' and the [other] person can relate with, 'My sister needs health care.' That's a big difference, and it's very powerful."