When Frank Zappa discovered him, in 1977, Adrian Belew was playing in a costumed cover band. Belew had never played odd time signatures and couldn't read music, but according to Belew, "[Zappa] wanted to be able to do some of the funnier music and wanted somebody there who wouldn't object to wearing a dress, a helmet or whatever it took."

Over the next four years he would play not only with Zappa, but with David Bowie, the Talking Heads and Robert Fripp. The latter partnership made him famous, when in '81 Belew joined Fripp in re-forming art-rock juggernaut King Crimson. Belew began to forge his idiosyncratic guitar sound with the new lineup's debut, Discipline.

"I was the first guy I ever knew with a guitar synthesizer and Robert was the second," Belew says with a laugh. "You had these two guys who could suddenly sound like trumpets and violins and things, which was totally strange."

Belew's been known for it ever since, customizing his guitar rig with plenty of signal-processing and looping equipment to wring odd, otherworldly tones from it (and famously mimicking animal sounds on the Talking Heads' landmark Remain in Light). He continues pushing his craft through a variety of guises, including album guest spots -- such as the recent Nine Inch Nails release, Ghosts I-IV -- periodic albums and performances by King Crimson (Belew began rehearsing last month for shows in August). There's also pop-driven Cincinnati compatriots the Bears (who released their fourth studio album, Eureka!, last year) and Belew's solo work, always blending pop and experimental elements.

"I've always had a little of both in my background, and I constantly try to forge the two together," Belew says. "Sometimes it works, sometimes it doesn't. Sometimes you have to do them separately. But more and more I give up on pop music because it seems like a losing battle and there's just no place anymore for interesting pop music." 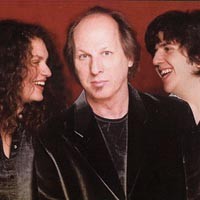 Three and a perfect pair: Adrian Belew with Julie and Eric Slick

In lieu of The Rolling Stones concert, experience Mick Jagger and crew on WDVE