Sometimes it's tempting to think of restaurants as movies. After all, some of them do come packaged with plots, sets and characters. Grit & Grace, a new Downtown venture from the people behind Spoon and BRGR, is such a restaurant. It even comes with a pitch, printed on the menu:

"Grit & Grace pushes opposites to the extreme to bring you the most unique and balanced dining experience Pittsburgh has to offer."

Whether extreme opposites can combine to create balance is a point we felt was open to debate, and Grit & Grace certainly gave us plenty of food for thought. Our initial impressions were disconcerting. The decor begged the term "eclectic," veering from industrial chic to bling, with seating that included upholstered banquettes and high, copper-topped communal tables. And the menu was all over the place, with Asian ingredients from various traditions combined and/or fused with those from the Mediterranean and American comfort foods, and seemingly no fewer than five ingredients in every dish.

This was all the more impressive since most of the dishes at Grit & Grace are small plates, designed for sharing. While some menu descriptions made sense to us as updates of familiar classics like reuben sandwiches or ramen, others seemed to cross from fusion into kitchen-sink combos. And with 20-odd choices, each packed with unexpected combinations (Thousand Island sabayon?), we began to feel overwhelmed.

Thankfully, dim sum came to our rescue. Grit & Grace interpreted traditional Chinese dim sum service — in which diners help themselves to tiny morsels of meat or individual buns from a rolling cart — with a tray of five appetizer-size offerings. At only $5 a plate, this seemed like an excellent, low-stakes way to get to know the kitchen.

As it turned out, the rewards were big. Pork-belly bites were meltingly tender with flavorful fat, yet satisfying with moments of crispness and chew, in a zingy orange sauce flavored with chili, garlic and ginger. Sliced beef tataki was also excellent, with a perfect dollop of peanut emulsion that recalled satay. Slices of shrimp were sweet and balanced with bitter-tinged broccolini in a kimchi vinaigrette; scallops, too, were succulent, in a citrusy lobster gel. Only a little bowl of cold soba noodles was underwhelming. 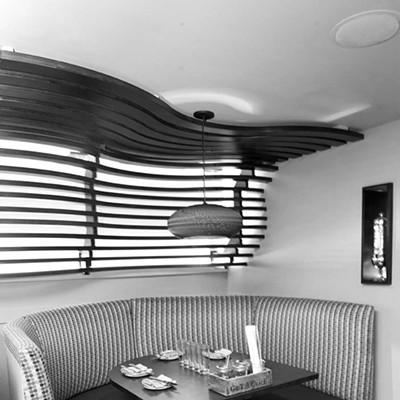 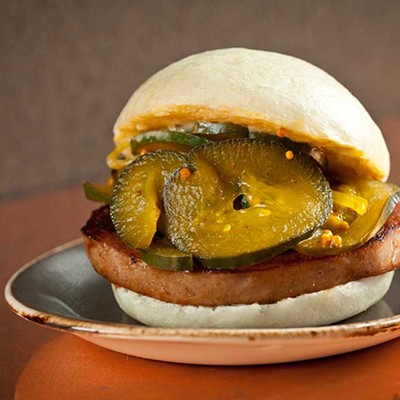 The success of the dim sum emboldened us to explore the rest of the menu. As with the decor, the level of refinement varied. Dayboat scallops were sweetly browned, served with a rich lobster dumpling and tender roasted parsnip in a savory broth. A more rustic, but equally salutary selection was crispy "pig face" roulade served open face on sourdough bread, with fresh herbs, a sunny-side-up egg, pork rinds and hot sauce. The pork roulade fell somewhere between head cheese and pancetta in effect.

Supple morsels of short rib were served atop a halved cream-cheese biscuit. The biscuit crust was crisp and rich, its crumb delicate, while the white cheddar atop was sharp relief for the richness of the hollandaise sauce that also graced the meat. A thick slice of housemade mortadella was chunkier than the papery slices we get from the deli, but it captured the original's balance of ultra-tender pork and frank morsels of fat; accompanying coriander mustard was good enough that we literally ate some with a spoon.

While "extreme opposites" might be a slight overstatement, we found Grit & Grace's kitchen to be unafraid of strong contrasts, while top-notch execution, on an ingredient-by-ingredient basis, maintained balance down to the drizzle of sauce or pinch of seasoning.

But for all that dazzling mastery, there were times when the kitchen flew too close to the sun. Given the choice of two desserts — a chocolate truffle number topped with Fruity Pebbles, and a sort of deconstructed apple pie topped with crumbled Cheez-Its — we went with the latter. The cooked apple filling was suitably sweet-tart, the baked wedges of crust nicely crispy and flaky, but the double shot of Cheez-It ice cream and crushed Cheez-It topping was a gimmick that didn't work. The artificial flavors of the snack crackers mocked, rather than mimicked, the intended cheddar aspect. It confirmed our original apprehension that the kitchen, in pursuit of extreme opposites, might sometimes go too far.

Nevertheless, Grit & Grace earned our recommendation of its confident approach to a wildly various list of boldly complex dishes.