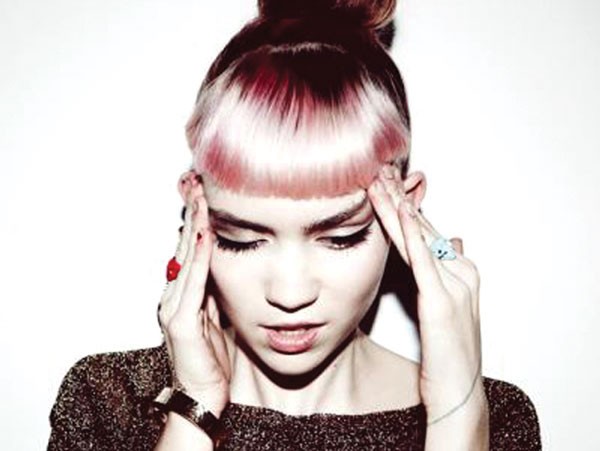 The March 20 Grimes show at Brillobox was cancelled due to illness.

Of all the vague genre monikers that get batted around independent music's current vocabulary ("chillwave" being the most infamous, and "witch house" the most blatantly stupid), "post-Internet" is probably the most bewildering. It's a simple but deceptively nuanced buzzword that works only because it wasn't born from the haughty pens of beard-stroking music critics. Montreal native Claire Boucher, who churns out 21st-century electronic pop as the artsy synth-fueled fem-bot Grimes, conjured the label in an interview with The New York Times Magazine in late 2011, elaborating a thesis that perfectly captures Generation Y's approach to making music.

"The music of my childhood was really diverse because I had access to everything," said the 23-year-old Boucher, who came of age during the rise and subsequent onslaught of file-sharing services and music-blog hype machines. "Basically, I'm really impressionable and have no sense of consistency in anything I do."

As Grimes, Boucher enthusiastically inhabits her unpretentious outsider status, complete with a fashion sense that's part derelict Disney princess, part New York runway couture. She creates sonic landscapes that are immediately fun, aesthetically mesmerizing and unusually substantive. With the 2012 release of her third album, Visions (note the plurality of the album title; she doesn't have just one "vision"), Boucher has managed to boil down a wide-ranging set of influences (from Aphex Twin to Mariah Carey and Massive Attack) into a gleaming document of post-millennial art. Moving away from the murky, sometimes uninviting, synth pop of Grimes' two previous releases, the new album is both dense and ethereal, incorporating tight patchworks of techno-infused textures permeated by Boucher's celestial falsetto.

The first third of the album is arguably the work's creative peak, lining up four tracks that work both as midnight dance-party bangers (in the vein of Scandinavian electronic-pop masters Robyn and Annie) and headphone pocket symphonies. "Infinite Love Without Fulfillment" and "Eight" stay under the two-minute mark and combine complex synth rhythms with careful vocal looping and pitch modulations. The results are undeniably catchy, but more experimental than the couplet of "Genesis" and "Oblivion," which best showcase Boucher's casually commanding pop instincts. "Oblivion" is particularly affecting, pulsing with a hypnotic, brittle synth line beneath the prettiest vocal harmonies on the album. (Check the line "'Cause when you're running by yourself, it's hard to find someone to hold your hand," in the second verse, for evidence.)

The accompanying video for "Oblivion" shows Boucher spontaneously performing the song, with headphones on, in the crowds of a dirt-bike rally and a high-school football game. The concept may sound simple, but the video manages to be arresting, with onlookers appearing to be equal parts confused, happy and angry. One shot in particular has the camera positioned slightly behind Boucher as she sits alone facing the stadium bowl, happily dancing and singing along to "Oblivion" playing in her headphones. It's a fantastically concise, and endearing, snapshot of the musical philosophies percolating beneath Grimes' chilly, synth-drenched exterior: She always has fun, with or without an audience.