"It was a bad day in the Anderson family," David Anderson says, recalling the cold afternoon in January 2011 that changed his dog Lulu's life forever.

David and his wife, Marci, of Homewood, were staying at their rural cabin near Kittanning with their seven greyhound "children"— many of whom they had personally rescued from Spain. Lulu, a beautiful galgo (Spanish greyhound) with a coat like marble rye, returned from time outside. She stood quietly at the front door, waiting for someone to open it. David was horrified to see that Lulu was missing part of her front right leg. It was a clean break, at the elbow, but there were tendons hanging and lots of blood. "It was like a zombie movie," David remembers.

They never found the missing limb. Since it was a snowy day and the ground was covered, the Andersons figured Lulu must have stepped into a hole and snapped her thin leg off. Somehow, Lulu had hobbled home.

"She wasn't exhibiting any chaotic behavior," Marci says. "She was just standing there ..."

"She was in shock," David adds.

When the Andersons brought her inside, though, chaos reigned as Lulu began screaming, which sent their other six dogs into attack mode. Greyhounds usually have an extremely docile temperament, but the ear-piercing screeches triggered the instinct to kill the vulnerable member of the pack. David and Marci found themselves trying to protect Lulu — and themselves. In the frenzy, one of their dogs bit David's face. 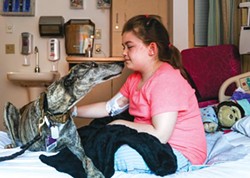 As owner of The Golden Bone Pet Resort, in Homewood, David had both the knowledge and the resources to help Lulu. He administered a sedative and wrapped her leg. Then, he and Marci whisked Lulu to the emergency vet, where the remainder of her leg was amputated. David said that dogs will try to walk on a stump, so it was necessary to take her leg off at the shoulder.

After three days, Lulu was released from the hospital. She spent 10 days at the Andersons' cabin with David, where he allowed her to recover at her own pace. For the first three days, Lulu "screamed bloody murder" whenever David approached her. "She was crazed," he recalls. After a week, she was hopping around. In two weeks, she had healed, and the bandage was removed.

The Andersons say that the accident didn't affect Lulu's personality.

"She's like a walrus and a wildebeest," Marci adds.

Their goofy descriptions aside, Marci and David knew that Lulu had the right temperament to be part of the pet-therapy program at Children's Hospital. Marci has been taking dogs to Children's since 2001, and David has been going every week since 2009. Given David and Marci's extensive dog-handling experience (Marci is president of rescue organization Steel City Greyhounds), they can easily spot which of their dogs might be a good fit for the program. 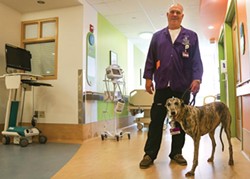 In order for dogs to be accepted into the pet-therapy program at Children's, they must pass a rigorous evaluation, including having their ears pulled, having an IV pole wheeled near them and having someone sit on them. If they snap or show a heightened startle response, they fail. In addition, prospective therapy dogs can't jump, lick, bark or be hand-shy. Only one out of seven dogs typically passes the test. Five of the Anderson's dogs have become therapy dogs, including Lulu, who was accepted into the program in 2012.

Lulu's somewhat unusual injury has been an asset in this program, because she can be of particular help to children who have lost a limb themselves. "I think one of the neatest things about a case like Lulu is [when] kids have to do physical therapy and they want them just to get out of bed and stand up or walk the hall or something," Marci says. "What an inspiration to see a dog like Lulu. ‘Oh, she can do it. I can try it.'"

The Andersons give the children postcards of their dogs when they visit. Lulu's postcard has a picture of her with her cast after her leg was amputated, "to show the kids that she had to heal," says Marci. "There's a little bit of a connection if they're in a cast."

The Andersons felt that connection during Lulu's very first visit, with a child who had lost a foot. They put Lulu in bed with the child, who was only 3 or 4 years old. "The whole family's there, and I mean, everybody's there, and he starts rubbing her where her limb's gone," David recalls. "He's like, ‘That doesn't hurt her ... I guess I'm going to be OK, too.'"