Power-pop quiz: What do the Frampton Brothers, Charm School Confidential and Sunday Driver all share? Apart from, I'm sure, myriad unprintable commonalities, at some point they've all been musical channels for Pittsburgh native Greg Hoy.

If Greg Hoy's name inspires a certain déjà vu, it's because he's appeared in these pages before -- as a music critic. In the late '90s, Hoy contributed regularly to InPittsburgh and, later, City Paper, chronicling the rising national interest in bands such as Rusted Root, Brownie Mary and Bitter Delores. In 1999, a production job at the Long Island Voice took Hoy to the New York area, and the last few years have found him abandoning music journalism to focus on his own craft.

"I was too critical of what [music] I wrote. I was always coming at it from that critical point," he says via phone from New York. "My whole goal when I started writing music again was to do an album a year."

He's three for three so far. Along the way, he's snagged placements in television programs, independent films and advertisements, in spite of essentially self-releasing his records through the preferred power-pop vehicle, Not Lame distribution.

For his latest, Tastemakers & Heartbreakers, Hoy recorded all the instruments himself (it helps that he's also an audio engineer). Cramming 14 songs into 39 minutes, the record's a stockpile of stinging guitar hooks, sardonic lyrics and catchy choruses; altogether, it's reminiscent of Elvis Costello's Get Happy! with nods to Cheap Trick, Marc Bolan, Steve Nieve and Weezer. Hoy could be musing over his own peculiar career track when he sings: "She went to school to be a dancer, now she's working on romances. / A ride to share, a job to hate, this much I know we can relate."

But through it all, he's returned each December to play a show at the 31st Street Pub, reuniting with old friends and comrades in power pop, including backing band The Enablers: Paul Labrise (guitar), Ray Vasko (bass) and Tom Emmerling (drums). And now, former Pittsburgh Post-Gazette music critic Ed Masley -- who moved to Arizona earlier this year -- is following suit, returning to rock alongside Hoy with The Breakup Society. 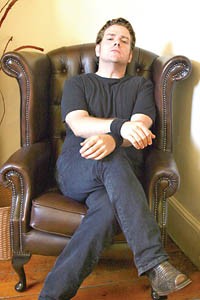