Greensburg native Sujata Day has already made it in Hollywood, but now she wants to bring her Pittsburgh experiences to the big screen | Features | Pittsburgh | Pittsburgh City Paper

Greensburg native Sujata Day has already made it in Hollywood, but now she wants to bring her Pittsburgh experiences to the big screen 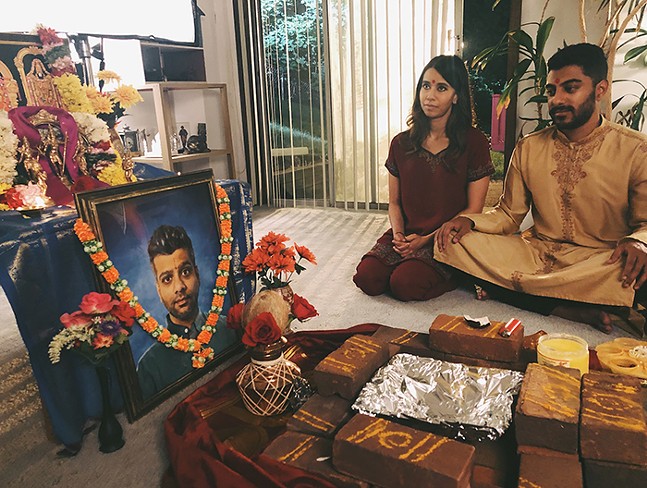 Photo: Kaitlin McHugh
Production still from Definition Please with Sujata Day as Monica Chowdry, and Ritesh Rajan as Sonny Chowdry
Sujata Day had a fairly typical Southwestern Pennsylvania childhood. She went to summer camp in Erie. She attended Catholic school for a while. She was part of a close-knit community that came over every year for Thanksgiving dinner and ate turkey and cranberry sauce.

There are some things that are less typical about Day’s upbringing, however. Westmoreland County is 95% white and home to very few immigrants. Day’s parents immigrated to Greensburg from the Indian state of Bengal, and Day spoke only Bengali until she attended pre-school.

But Day is really just another talented Pittsburgher. She eventually left the area to advance a career she likely couldn’t advance here. But she comes home to see her family often, and shops with friends at the Gabe’s discount store at the Greengate shopping center just outside of Greensburg. She lives for the evenings where she can just hang out in her parents’ backyard and watch the lighting bugs.

Southwestern Pennsylvanians who don’t personally know Day, whose given surname is Choudhury, might have seen her on the HBO series Insecure, where she played Sarah for three seasons, or her guest appearance on The Netflix comedy I Think You Should Leave. Her career in Hollywood has spanned more than a decade, and more recently, she has begun to write, produce, and direct films and television shows.

Her most recent effort, Definition Please, was filmed in Greensburg in 2019. The independent film is about a Scripps Spelling Bee champion whose adult life didn’t pan out the way people might have expected, and how the lead character (played by Day) is navigating family struggles, career ambivalence, and her community while living in Southwestern Pennsylvania.

Day says she created the film to showcase a story Hollywood is hesitant to tell, one that is centered around her and other Asian-Americans’ experiences in places like Pittsburgh. Not every Indian-American portrayal in film, she says, needs to speak with an accent or work as a scientist or be celebrating a traditional Indian holiday.

“Back in the day, they would make me do accents, or make me wear Indian costumes,” says Day of her early struggles landing the roles she wanted. “But that is not me.”

Day’s full-length directorial debut is based partly on her experiences, but isn’t autobiographical. The film’s cast is virtually all Asian-American, and it provides an authentic look of that American experience. It just took a lot of personal initiative, connections, and love to make a film that was true to herself.

“I am creating the work that I want to see,” says Day.

Day grew up in the Fort Allen neighborhood, just southwest of the Greensburg city limits. Her father worked as a mechanical engineer in Jeannette, and she spent her childhood attending the Hindi Jain Temple in Monroeville.

She always loved the arts, acted in school plays, and had a lot of encouragement from her parents, who she says were more liberal on these matters than other Indian parents. She says her parents were always in the front row for every school musical or performance.

Her journey to Hollywood could make a good movie of its own. Day excelled in math and science growing up, and she attended Case Western University in Cleveland to earn an engineering degree. While there, she worked as an intern at a global consulting firm, even though she was still in love with the arts and had a goal of moving to Los Angeles to pursue an acting career.

The consulting firm offered her a full-time job and said she could pick where she wanted to live. Day chose L.A., naturally, and while there, she got headshots and auditioned for roles.

She said the firm was the perfect job because she didn’t really want to be a consultant, but it was easy to avoid any real work while still earning a large salary. Basically, taking advantage of “the Man” to advance her acting career. After a year, the firm made cuts and let Day go, but told her that they were sad to lose her, even though she says she never really worked on any projects.

“After that year, the HR rep said she was sad about letting me ago, and I was thinking, like, ‘I didn’t do anything for this company,’” says Day, chuckling. “I even got severance for 8-10 months.”

Shortly after, she got roles in some commercials, and she has never looked back. Eventually, she landed a role on Issa Rae’s web series The Mis-Adventures of Awkward Black Girl. This web series was the basis of the HBO show Insecure. Day says her friendship and work with Rae inspired her.

“[Rae] was an early adopter of ‘I am writing my story to get it out there’ style of creating,” says Day. “I have never seen my story out there, and I thought, ‘I am just gonna write a bunch of scripts.’” 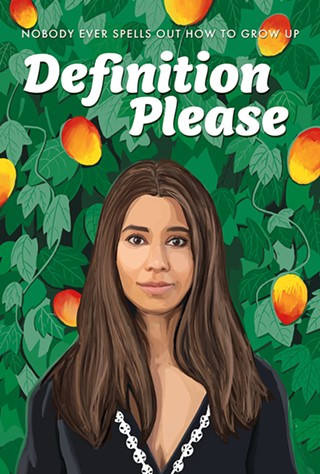 Day also got inspired by watching the Scripps National Spelling Bee and noticing just how many South Asian Americans dominated the contest. (She had participated in spelling bees as a kid and even won her school’s version as a youngster.) Day says that she noticed how many spelling bee champions went on to do impressive things with their careers, but thought that couldn’t be true of all champions.

Her script was born around the idea of a South Asian spelling bee champion whose adult life has become more aimless compared to the stereotypes of over-achieving spelling prodigies. That’s where the title Definition Please comes from. It’s an actual phrase used in spelling bees to help determine the proper spelling of a word, and it’s an assessment of the film’s protagonist, who is struggling to care for her ailing mother, as well as help her brother confront his mental illness.

The film is currently on the festival circuit, so Pittsburgh viewers hoping to catch it might have to be patient. Day says she is trying to get it accepted to a Pittsburgh-area festival so locals can watch it. She says the film never would have been made without the help of family and friends. Not only did they help with production, but they also helped finance Definition Please.

Her Greensburg community inspired her to tell as authentic a story as she could. Day shot the film at her parents' home, and one night during production last year, she warned neighbors of a loud late-night scene. She expected complaints; instead, many neighbors pulled up folding chairs and watched the action.

For Day, this was emblematic of her Southwestern Pennsylvania experience: friendliness, community, love, and support. And, even though the Pittsburgh area struggles with persistent racism, Day says she didn’t experience any of it herself while growing up here. She says typecasting in Hollywood is where she personally experienced racism.

But she knows that many other South Asians in the country have had to deal with bigotry. And this drives her film, which is based on her real life (like showcasing her supportive Greensburg community) but also not autobiographical (as Definition Please addresses racial stereotypes head on). 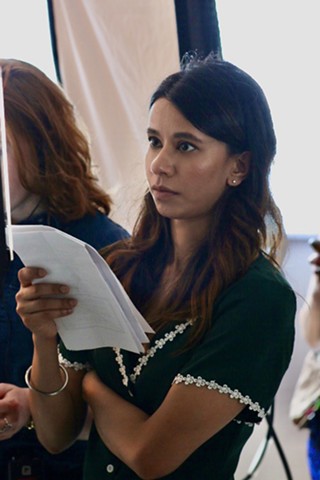 Photo: Maximilian Petrunyak
Production still from Definition Please
“I really connect to stories about race because there are not that many stories out there,” says Day of South Asian-American experiences. “This is the kind of stuff that I want to see. … I think the audience is asking for these authentic stories.”

Pittsburgh audiences might see a film with mostly Asian faces and not see similarities in the current-day Pittsburgh. (The region is one of the whitest large metros in America.) But that doesn’t mean Definition Please is inauthentic because spending time with many other Asian-Americans in the Pittsburgh area was Day’s childhood. These stories are authentically Pittsburgh, even if they get less attention.

Day hopes those fortunate enough to see her film come away with a sense of empathy and remember there are many other stories like hers out there. It just might take more people like her to personally make them, and not wait around for Hollywood to catch up.

“I would just want them to know, from Definition Please, to carry a sense of empathy,” says Day. “This is a very American story, with South Asian faces they might not have seen before.”