“It’ll be fun to celebrate together one last time.” 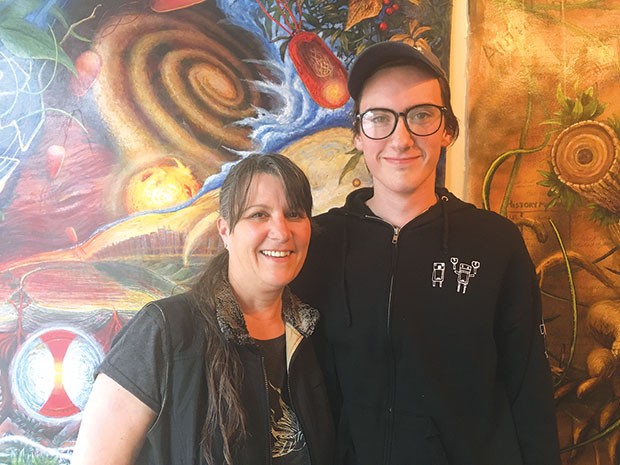 On a rainy Thursday morning, the quiet downtown of Greensburg is nearly devoid of life, except for a few people under big umbrellas rushing to work. But upon opening the door to DV8 Espresso Bar & Gallery, a lively world appears.

A young boy chomps on popcorn and watches a movie on a phone, while his caretaker studies. Adjacent to them is a funny older gentleman with a briefcase who is filling out papers. They all know each other well.

Owner Terri Barill’s iPod provides a quiet soundtrack to the scene, as folks come in for coffee and conversation. Sections of a large canvas mural, the work of Mark Barill and some art students from nearby Seton Hill University, find homes on the walls, along with a variety of artworks. I spy several Gabe Felice pieces, and when I ask Terri Barill about them, she smiles and tells me he used to work at DV8. “Everybody knows Gabe!” she says.

When the Barills moved to Greensburg, they drove past the current DV8 location and Terri fell in love. After buying the two buildings next to each other, the two fixed up the shop. As soon as it opened, the community flocked there, and it has thrived for the last 15 years. But now, after a decade and a half, DV8 is closing its doors.

For as long as I can remember, DV8 has been Greensburg’s only DIY art gallery and music hub. In its 15 years of existence, more than 100 artists have shown work in its gallery. In the past three years alone, more than 150 music shows have been held there as well.

The music shows have featured local and touring acts, and have always been free. All gallery showings and shows were alcohol-free so they were open to all ages. It was Terri Barill’s vision to create a space that encouraged a sense of community across all ages.

It was also this environment in which Terri raised her son, Sean. Now a high school senior, he books the shows at DV8. His maturity and DIY skill set seem to be greatly influenced by growing up in a communal, multi-generational hub with lots of people and art around.

The two make a great team, with Terri running the shop and Sean booking the shows. As Sean’s graduation from Greensburg Salem approaches and his move to college grows nearer, Terri decided it was a good time to close up shop to spend time traveling to visit her sons.

To celebrate the shop’s legacy, Sean and Terri have coordinated a final show featuring some of the many artists who have performed at the shop over the years, with space for jams and impromptu performances.

“It’s a great feeling that people who have played here over the years want to come back and play because they love it,” says Terri. “It’ll be fun to celebrate together one last time.”

DV8 was an important hub to so many musicians in the community. Terri has realized her vision of providing a home for intergenerational friendships, and community-inclined organizing and gathering, and a place to experience art and live music for free and in a safer space.

And as much as the shop is closing on good terms, Terri acknowledges it’s a bittersweet time.