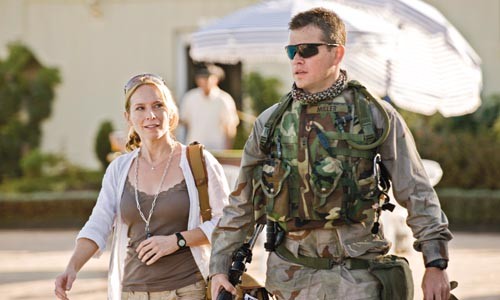 If the Iraq war had never happened, Green Zone might have been a serviceable and entertaining action thriller. It's a fast-paced romp, featuring standard heroes and villains, vicariously made exciting with documentary techniques, and semi-serious with geo-political intrigue.

But the war did happen (and still goes on in some form). Thus, Paul Greengrass' action film is rooted in plenty of ugly history we're all too familiar with. The film is inspired by Imperial Life in the Emerald City: Inside Iraq's Green Zone. The book, by Washington Post correspondent Rajiv Chandrasekaran, is a hair-raising account of the first year of American occupation in Iraq, and the various strategic blunders made during that time.

The book is rich with detail about policy and administrative failures, but it's the sort of narrative material that, at best, makes a good Frontline. For his purposes, Greengrass creates a movie-ready tale out of one specific aspect -- the fruitless search for weapons of mass destruction. For grace notes, Greengrass slips in tidbits of outrageousness detailed in the book, such as the safes full of bribe money or the Pizza Hut deliveries to Saddam's former palace, now housing partying interns.

In the spring of 2003, Roy Miller (Matt Damon), an Army chief warrant officer, leads a team searching out WMDs. But despite "solid human intel" from a source codenamed "Magellan," the reputed storage sites are all busts.

The Pentagon -- represented here by Greg Kinnear -- says "keep looking," while the grizzled CIA vet (Brendan Gleeson) dismisses the existence of any WMDs as "a crock of shit." Meanwhile, the reporter (Amy Ryan), who staked her reputation on leaking the Magellan info, is growing suspicious. (Similarities to such real people as Ahmad Chalabi, Paul Bremer and Judith Miller are surely coincidental.)

But the search for truth isn't as megaplex-friendly as the hunt for a bad guy. After a top Iraqi general, formerly in charge of the unconventional-weapons program, is conveniently spotted flitting from a safehouse, the hunt is on. Everybody wants this guy: Miller, the Pentagon, Special Forces, CIA -- even Freddy (Khalid Abdalla), the Iraqi citizen who turned in the tip.

The actors, while fine, are stuck in simplistic roles. Damon plays Miller as the square-jawed, can-do American. His character doesn't have much nuance, but rather an easily identified sense of right and wrong. Only Freddy, the stand-in for the Iraqi man in the street, gets an emotional moment. His anguish is the heart of the crisis: Can Iraqi altruism and patriotism survive the occupiers' aggressive and insensitive tactics?

In theory, Green Zone should play to Greengrass' strengths. He made his bones shooting in war zones, and has delivered both docu-dramas adapted from real crises (Bloody Sunday, United 93), as well as two hyperkinetic episodes of the Bourne spy-thriller series (also starring Damon).

But Green Zone simply doesn't work as a docu-action hybrid. I tried to watch it simply as a thriller, but was undone by Greengrass appending too much reality. (Hey, it's footage of George W. Bush bleating that "major combat operations in Iraq have ended.")

Here in the real world, much of what happened in 2003 is still painful to chew on. Are we ready to accept such watershed actions as the reliance on faulty intelligence or the disbanding of the Iraqi army as mere plot devices? Knowing everything we know now, it's awkward to embrace a series of catastrophic policy blunders as "edge-of-your-seat entertainment," the colorful backdrop for a fantasy action hero to get his easy morality on. In English, and some Arabic, with subtitles.