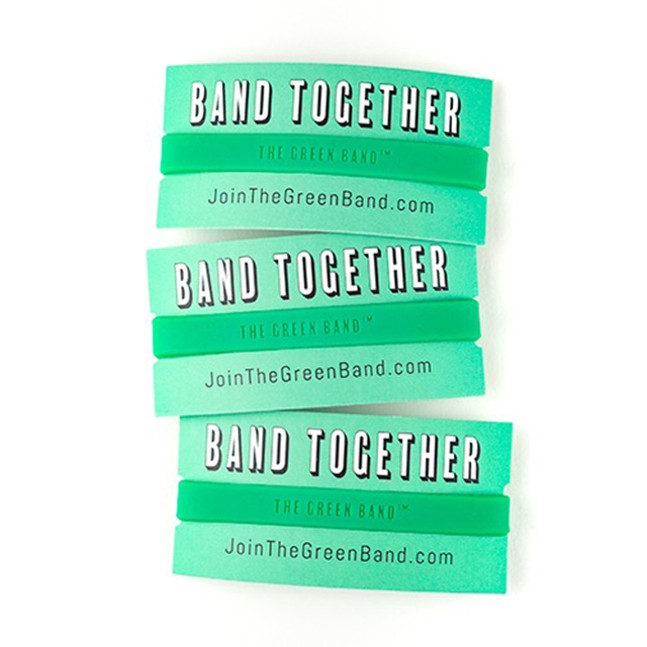 A bad date was the last straw for Anne Lopez. She paid the tab, left her suitor at a bar, and thought “I can’t do this anymore.” Fed up with terrible matches, she created Green Band.

Green Band is a lime green bracelet made of silicone, similar to those from the Livestrong craze. The movement is an alternative to online dating, focusing on in-person meetups. The bands communicate a green light for other singles, indicating a willingness to be approached, have conversations, and connect.

“I had such bad experiences online,” Lopez says. “And I was trying really hard. I felt like I was doing all the right things, not playing games and giving people a chance, but just one after another, it was such a waste of time.”

Dating apps preach love at first swipe when, for many users, viable matches are few and far between. There are pre-date conversations and judgements that don't necessarily match the reality of an in-person meeting. As Lopez puts it, meeting face-to-face, at the very least, is a time saver. In person, “you just know instantly whether they’re an option or not.”

“When dating sites took over, everyone went to their phone and thought, ‘this is the way I’m gonna do it,’ and forgot how to meet new people in real life,” Lopez says.

Swiping at home keeps dating safe, away from the vulnerability of in-person rejection. Even inside bars, an easy space for connection, people cling to groups.

Green Band aims to change this culture. Members of the movement are encouraged to wear the band all the time, as an easy way to ask if people are single without being “totally weird.”

“Instead of ‘Are you single, do you want to go out on a date with me, right now?' the band gives you an opener,” says Lopez, who though now in a relationship, used to wear her band everywhere. “I envision a day when you can go in a grocery store and see ten options. How great would it be if you knew that the cute guy at the cereal aisle was single?”

“I envision a day when you can go in a grocery store and see ten options. How great would it be if you knew that the cute guy at the cereal aisle was single?”

Lopez creates a causal approach to organized dating. There’s no three-minute time cap or ringing bells (though she says she’s open to anything). She loses “life partner” pressure by making the band about community. Singles and non-singles (only singles wear green bands) are welcome at all events. Green Band provides a network for all Pittsburghers.

Now, she’s focused on building trust. The next step for Green Band is in addressing common fears and questions like, “Who will be there?” and “What if it’s awkward?”

“I know we’re onto something, because so many people love this idea. We just have to find the right way to reach people,” she says.

Still new to the city, Green Band already has success stories — even one from the founder herself. She has plans for 2019 events, hinting at collaborations with matchmakers and bars, trivia nights, and dating games.

Have our dating coverage sent directly to your inbox by signing up for our Arts+Entertainment newsletter here.