Poor Greece. We study its ancient gods, but call them by Roman names. We revere its architecture, but flatter it mostly with pale imitations. And while we regard its neighboring Mediterranean cuisines either as haute rivals to French or as exotic windows to the Middle East, our experience of venerable Greek foodways may well be limited to church festivals and souvlaki stands.

Which leads to the chicken-and-egg question (a riddle invented by Plato, we think): Are there so few nice Greek restaurants because the food is underappreciated, or is the food underappreciated because it is too often served in humble circumstances?

Greek Stop, a new restaurant near Hartwood Acres, addresses one side of the conundrum. While its strip-mall location isn't exactly posh, its small dining room is fresh and bright with azure accents that evoke the iconic island of Santorini, whose white stucco and ocean-blue domes feature in archetypal travel promotions for the Greek isles. Beneath white butcher paper, the tables are dressed with shimmering silver and gold cloths that would suit the gods themselves. Nautical decorations reminded us that Greece is surrounded by the wine-dark sea, but our favorite touch was the trio of family pictures on the wall: '70s-vintage snapshots show a family steeped in old-world tradition, maintaining it in the brick-and-asphalt landscape of the Rust Belt.

The menu is brief and unfussy. Starters consist mostly of familiar phyllo-based pastries and stuffed grape leaves, while main dishes include the inevitable gyro and souvlaki as well as mousaka and pastitsio. In the absence of new or unusual dishes, we focused on the preparations of tried-and-true items.

We started with the Grecian platter, consisting of four dips with olives and pita wedges. The pitas were wonderful, warm and fluffy inside with crisped edges. The hummus had a rustic texture, with chewy bits of chick pea still intact, but unfortunately the flavor was less robust. Spicy feta dip should have been called salty feta dip, but the tabuhlea featured a delicious balance of fresh-tasting vegetables, herbs and grains. The skordalia -- potatoes pureed with lemon and garlic and served cold -- was also excellent, its bold flavors kept barely in check by the mild spuds. One other starter, keftedes (meatballs), was a bit on the dry side. We compensated by dipping them liberally in the accompanying tzatziki (yogurt sauce), though we were disappointed that it was flavored with dried herbs.

Jason was prepared to forgive all once his dinner -- a gyro, in platter form -- arrived. The thick, pillowy pita that we enjoyed with our appetizers was especially successful as the foundation for the gyro, and the toppings were all good quality, even the tomatoes, which are so often mushy and wan this time of year. A side of lemon potatoes -- big chunks this time, boiled and dressed with tart citrus -- was simple but delicious, and would have worked well with the grilled salmon entrée.

Angelique's Greek salad showcased what Greek Stop can do with fresh ingredients. Instead of the usual iceberg lettuce, a sweetly herbal dressing clung to tender spring greens, paper-thin sliced onion, cucumber, grape tomatoes, feta cubes, olives and pickled peppers. If all Greek salads were this good, we'd never pass up the chance to order one.

Yia Yia's Pastitsio was pure comfort food, a sort of Grecian cross between lasagna and macaroni and cheese. The recipe promised a hint of nutmeg and romano cheese, but the hint was too subtle. The topping of cheese was more crusty than melty, and the dish reminded us more of a potluck supper casserole than a taste of the Peloponnesus. A side dish of snow peas, apparently braised in butter and some sort of savory pan sauce, was the true star of this plate.

Greek Stop's menu promises "Simple But Elegant Greek Cuisine," and the restaurant partially delivers. The surroundings are, indeed, elegant in their simplicity, but the cuisine is mostly just simple. There's nothing wrong with the familiar favorites -- after all, they have become so for a reason -- but to really satisfy, their preparations must be consistently superb. 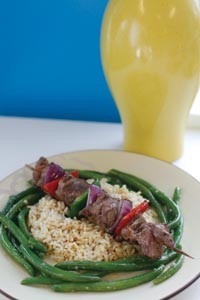