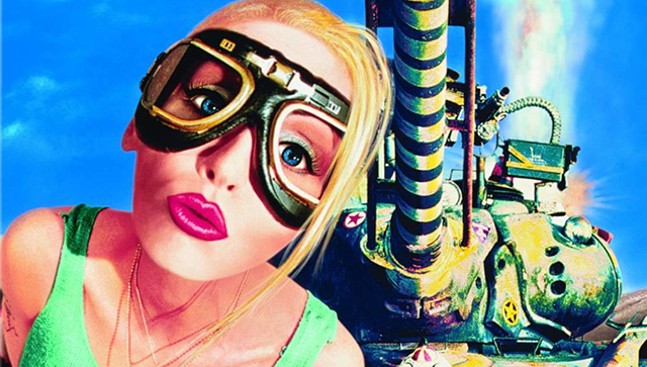 To hell with comic book heroines only portrayed as princesses or sex objects with substandard plot lines targeted to a male audience. What female comic book fans need isn't another superhero sidekick in a bustier, but a resurgence of the greatest comic heroine of all time: Tank Girl.

But nah, they shouldn’t remake the 1995 film based on the comics from the late ‘80s. “They should re-release it,” agrees actor Lori Petty, raising her already high-pitched voice to an excited squeak. She played the title role and says she would “love” to help bring it back to theaters.

Despite not becoming a box office hit when first released, the film remains a cult classic. Tank Girl was the ultimate punk-rock, post-apocalyptic hero: a tough as nails, foul-mouthed, sex-positive woman who didn’t take shit from anyone. Sure, Tank Girl had a slim build and nice titties, but unlike so many other women portrayed in comics, she also had a bazooka, got her rocks off with a mutant kangaroo, and lived in a goddamn tank.

Hundreds of fans still dress up as Tank Girl to meet her at conventions, like Steel City Con, where Petty will be greeting fans in Monroeville this weekend. She says women have asked her to sign their breasts and then show up at the next con with her autograph tattooed.

Does it feel weird? “No, not anymore,” Petty says. “I love making people happy.”

And it’s not just her Tank Girl character fans are drawn to. Ask people where they know her from, and you’re likely to get different answers from everyone.

“60-year-women come up to me and say Orange is the New Black,” Petty says of her portrayal of inmate Lolly Whitehill on the Netflix show. Point Break and League of Their Own are two other fan favorites.

Recently, Petty tweeted Macaulay Culkin about poop. “He posted something about juicing, and I told him he needs to eat the whole orange.” In the past week, she has also tweeted to writer Roxane Gay and repeatedly calls Donald Trump out on his bullshit. “You have to,” she says.

When asked if there’s anyone she’d love to meet but hasn’t, she says, “No, they’re all dead.” But then she pauses and answers, “Beyoncé,” explaining how empowering she is and how much she admires her work. As she’s going on and on about her being a feminist icon, I can’t help but think, “Damn, it sounds like she’s describing Tank Girl.”