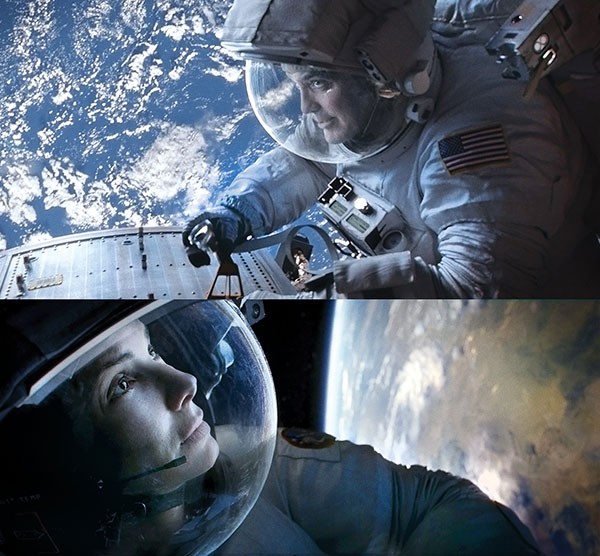 Things we know about space: It's super cold or super hot; there is no oxygen; and in it, no one can hear you scream. All these things matter — a lot — in Alfonso Cuarón's outer-space thriller Gravity. Gravity — the physical force that keeps you from floating away — is also missing from space, but the likewise-named condition of seriousness is absolutely on board here.

A pair of astronauts is working "off-structure" as their space shuttle orbits the earth. Ryan (Sandra Bullock) is a newcomer to space, assigned to perform a science mission, while Kowalski (George Clooney) is an old hand, and on his last assigned flight (uh oh). While Ryan is shaky even while tethered to the outside of the craft, Kowalski is having a grand time, zipping around freely while testing a new jet pack.

Then their work day goes very, very wrong. A meteorite hits a satellite, causing it to break into pieces that then slam into and break up other things in orbit, creating even more dangerous high-speed debris. (This real-life concern is called the Kessler Syndrome.) The shuttle is destroyed, stranding the pair in space, kept alive (for now) only by their protective suits. Damaged telecommunication satellites also leave the astronauts "blind," out of radio contact with Earth.

I won't divulge what happens next, because part of the movie's attraction is discovering how the astronauts deal with this nightmare scenario. It's a thriller, in which humans in space battle not fictional aliens, but the lack of natural elements we take for granted: air, sound, gravity and the ground beneath our feet. In a more meditative vein, Gravity is also about the most basic of struggles: finding the will to live when the odds of survival seem infinitesimally small. (Prepare for some obvious visual metaphors, such as tethers and assumed fetal positions.)

Cuarón co-wrote the film with his son Jonas, and it's a cracking good idea, delivered in a taut 90 minutes that even finds time for some patented Clooney goofing.

But what really sells the tale is the stunning visuals. (See this in 3-D if you can; outer space is huge.) The entire film looks like it was shot in zero gravity, but it's all movie magic: CGI, computer animation, actors attached to special rigs, cameras on robot arms, even puppeteers.

But you'll believe it, watching an astronaut spin over and over and over, while steady behind her is Earth and the vast emptiness of space. It's horrifying (and gorgeous), and you'll be thankful you're planted securely in your theater seat.