“They can go where people and machines can’t.”

At an evening happy hour at the Carrie Furnace in Rankin, a crowd gathered around an electric fence. The colossal, now-defunct blast furnaces loomed behind them, but their attention — and cell-phone cameras — were focused on nine small- to medium-sized goats and a miniature donkey.

“That’s my favorite one, with the gray ears,” the tour guide, named Jim, told the crowd. “Guys, on the Fourth of July, this was all covered. Look how much they have done and how much they’ve eaten.”

The organization that preserves the site hired Steel City Grazers, a goat-powered grazing company, to clean up an acre-and-a-half of territory made uneven by concrete tunnels and steel beams. For the past month, the goats have been eating around the clock, even munching on poison ivy, which doesn’t irritate them.

“They can go where people and machines can’t, such as steep slopes, which, of course, in Pittsburgh, we have a ton of, or tight spaces, or areas like this, where it’s really [difficult] to get machinery,” says Carrie Pavlik, who co-owns Steel City Grazers with her husband, Doug Placais.

Pavlik and Placais own the small herd of goats, who have names like Wimpy, Darlyn, Doaz, Reuben and Favorite. The donkey is the herd “guardian” and will chase away predators, like coyotes or dogs. Since the company began operations earlier this year, the goats have grazed a neighborhood lot and the furnace site. Next, they’ll move to a couple of residential properties, then to a few jobs with municipalities and neighborhood organizations. The base rate is $300, with the price adjusted according to acreage and number of goats.

Pavlik got her start tending livestock and homesteading during her two-year Peace Corps service in Zambia. “At my hut, I had my own chickens, bees and goats,” she says.

When she moved back to the U.S., she and her husband bought a Nigerian dwarf goat. They have been growing the herd since.

Rivers of Steel Heritage Corporation, which preserves historical industrial sites in Western Pennsylvania including the Carrie Furnace, needed the “natural landscaping” at the “massively overgrown” relic of the Pittsburgh steel industry.

“There are areas that are very difficult for us to get people to do the work,” says Ron Baraff of Rivers of Steel. “Ultimately, [we want to] maybe build a herd ourselves. It’s the best way to deal with the vegetation issues we have. I prefer not to use chemicals here. There’s been enough of that already.”

Baraff says he wants the site to be an incubator for green technology. For example, the site already runs solely on solar power. “We want to be an attraction to tell the story of industrial America, and also be forward-looking and understand that ingenuity and innovation is a continuum. Time doesn’t end in 1978.”

Pavlik is pleased that the site is one of the company’s first jobs.

“I think it is really interesting that the goats are here at Carrie Furnace. I mean our name is Steel City Grazers, which is kind of a juxtaposition of the steel industry that made Pittsburgh strong, but also wasn’t the most environmentally friendly,” Pavlik says. “But now the goats are here, [which is] a very environmentally friendly way to do the landscaping. It means less herbicides, less fossil fuels.” 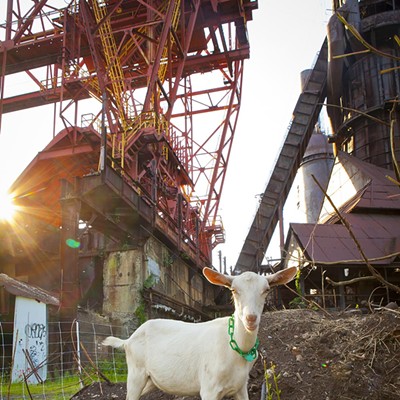 This fall, the Steel City Grazers are hoping to head to West Penn Park, in Polish Hill, for about a week to clear a quarter of an acre.

“The space we’re hoping to work in is very overgrown in vines and difficult vegetation to manage,” says Jake Milofsky, tree-care and restoration manager for Tree Pittsburgh, which works with the city to preserve the urban forest. “The goats are great at going in and eating all of the leaves and green stuff. So what we’re left with is woody material that’s easier to work with. Once the goats are gone, we’ll be able to go in with our staff and volunteers, and work much more safely.”

“It’s a great way to bring the community together,” Pavlik says. “And, it’s great PR for businesses. Where the goats are, people want to come and see them.”