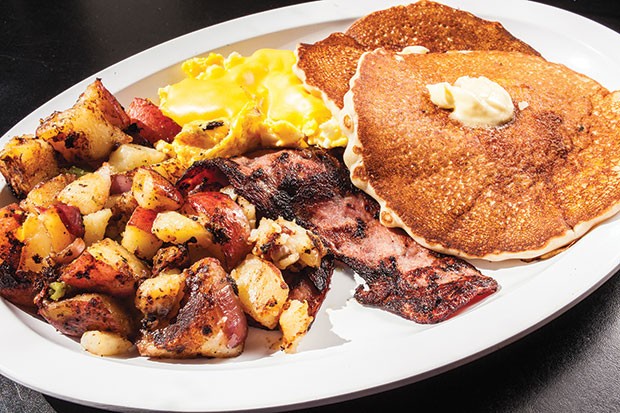 Grandma B’s storefront on Wylie Avenue is one of just a handful of restaurants in the Hill District. With little more than a counter, a row of stools and a couple of tiny tables, it’s too small to be a diner, but too griddle-oriented to properly be called a café. Open only from morning till afternoon, Grandma B’s is really a throwback to that classic concept, the lunch counter — or, in the parlance of its heyday, “luncheonette.”

Despite the name, it’s Dorian Moorefield, one of a trio of short-order cooks, who is the face and voice of Grandma B’s. Actually, he is her grandson, and Grandma B’s is a tribute to her, and what a warm, wonderful tribute. Dorian and his crew welcome regulars and newcomers alike, conversing comfortably even as they plate dishes, package takeout orders, update the Steelers score, and make sure everything is done just right. Grandma B’s is not quite a hangout — there aren’t enough seats for all-day lingering — but it seemed nobody, including us, was in a rush to get in and out.

The menu is halal, and doors are closed for an hour on Friday afternoons for prayers.

The fare here is not exactly Southern home cooking, but not exactly not. For breakfast, there were pancakes, eggs and French toast; for lunch, burgers, hoagies, salads topped with grilled meat, and plates of fried chicken and fish. The only overt signs of Muslim dietary practices were the turkey sausage patties, choice of beef or turkey bacon, and beef-based kielbasa.

We can vouch for all of the breakfast meats. The sausage was satisfyingly juicy and savory, something that lean, mild turkey can’t always deliver. We got to try both forms of bacon thanks to the staff’s generous hospitality: When we couldn’t decide which to choose, not only did they bring us both, they also threw in extra so we could all get a taste. Both varieties were thin and crispy, with the turkey tasting more of smoke, and the beef more of meat.

French toast was made with thick, fluffy Texas toast, lightly coated with a sweet, cinnamony batter and dusted with powdered sugar so that we almost — almost — decided to skip the syrup. Hotcakes were straightforward and good, ranging nicely from airy in the middle to almost cookie-crisp at the edges, thanks presumably to the well-seasoned griddle.

Most of Grandma B’s offerings are quick-cooking, diner-style classics, so we were pleasantly surprised when our burger was not the typical thin griddled patty. Instead, it was big, beefy and expertly cooked to temperature, with a good balance of juiciness and char. The Big Al burger came with — what else — Big Al’s sauce, a hard-to-pin-down love-child of barbecue and honey mustard that was a reddish in color and not too sweet; on a burger loaded with cheese, lettuce and tomatoes, its tempered sharpness was a good fit.

A chicken “cheesesteak” sandwich with the works — lettuce, tomato, onion, sautéed sweet and banana peppers — was savory, satisfying, and rendered extra-luscious by the heady combination of cheese and mayonnaise: the creamy factor was off the charts. The sandwich is also available with steak (of course), on a bun or as a wrap. Alongside this and the burger were fries made fresh to order. They had rough, crispy surfaces and fluffy interiors. We loved them as a side, and bet they are great as the base for a plate of “loaded” fries, topped with more or less every delicious thing on the cheesesteak.

Both fish filets and wings were tossed in seasoned flour before being dropped into the fryer. What came out was golden-brown and perfectly seasoned with a great balance of salt, pepper and cayenne. We had every intention of dousing our wings in hot sauce, but they were so good on their own that we didn’t bother. They were full size and well cooked, a great reminder that, while Buffalo may have created the wing craze as we know it, unsauced, simply fried wings are wonderful in their own right.

Grandma B’s may be tiny, but its reputation is growing mightily. It has already received a mention in a New York Times story about August Wilson, and it’s about to rep Pittsburgh in a cable-TV food show. So hurry up and get in while there’s still an open stool.

All are welcome to AARP's Jazz Revival on the Rooftop