"The intent is protecting teachers, the effect would be protecting ineffective teachers." 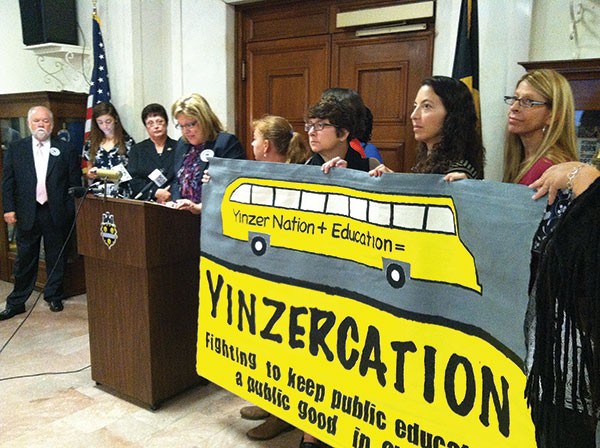 In early October, when Pittsburgh City Council called for a moratorium on school closings, councilors threw themselves into a nationwide controversy when they also decided to challenge Pittsburgh Public Schools' new system of teacher evaluations.

Beginning this school year, Pittsburgh's teachers will be evaluated, and any firings done, under a new system that relies more heavily on student achievement than did previous methods. Some teachers believe the bar is set too high.

The pairing of the two issues in the council's resolution was "curious," says Carey Harris, executive director of A+ Schools, a community organization. "One [school closings] is something that's easy to draw community energy around. The other [teacher evaluations] is not."

Four years ago, the district joined the Pittsburgh Federation of Teachers in developing a new system of teacher evaluations that combines classroom observations by principals and peers, student achievement on standardized tests, and student surveys. That system was never used to fire teachers. But in July 2012, the state legislature passed Act 82, an education-reform bill instituting a similar standard: that teacher evaluations be based 50 percent on observation and 50 percent on other student achievement. The law requires this new evaluation system to be used to fire teachers who are deemed unsatisfactory.

The change is a major one. "In education, this isn't the way we've done business," says PPS Superintendent Linda Lane. "Pretty much, unless it was really horrific in the classroom, we just kind of told everyone they were satisfactory and moved on. So that's a big paradigm shift for educators and we understand there's some angst around that."

This August, teachers got a look at what their evaluations would look like under these new requirements, and some weren't happy with what they saw. Fifteen percent of PPS teachers were ranked as failing or in need of improvement. Teachers who receive two failing ratings in a row will be terminated.

"The process has been agreed to for a long time and we've been using it for a while already. The issue that's in question is not the process," Lane says. "The issue is where those performance ranges are. In order to be proficient you have to have half the available points, and that's the issue."

"We've been so proud of the evaluation system we worked on. It shouldn't be an unfair system where our people are more harshly judged than teachers across the country. Our district is already exiting people at a much higher rate," Esposito-Visgitis says. But she declined to provide numbers on how many teachers were ranked unsatisfactory under previous measures, or how teachers in other districts were being measured.

Lane says she worked with the PFT for more than a year to reach an agreement on where ranges should be set. Under the original standards, 30 percent of the teachers would have ranked as unsatisfactory — double the current rate.

"While I think the intent is protecting teachers, the effect would be protecting ineffective teachers. This isn't about jobs, this is about educating children," says Pittsburgh school-board member Sherry Hazuda. "The union's stance is, all teachers are professional and they can do the job, but I personally know people who got into the teaching profession to get their summers off."

Two community groups stand on opposing sides of the debate. In support of the city council resolution challenging the new standards is Great Public Schools Pittsburgh, a coalition of community organizations that includes the PFT, Action United, One Pittsburgh, SEIU Healthcare PA, Yinzercation and the Pennsylvania Interfaith Impact Network.

"My concern with the teacher evaluations is we have to think of what this does to our students. We rely on high-stakes testing to evaluate teachers and it's creating all kinds of perverse consequences in our schools," says Jessie Ramey, founder of education blog Yinzercation. Ramey believes teacher evaluations are having a negative impact on students by causing them to undergo too many hours of standardized testing. "My interest is in making sure we're doing what's right for students."

On the other side is A+ Schools, a nonprofit advocacy group that has supported the district's teacher-effectiveness initiative.

"Research supports that [teacher effectiveness] is the biggest thing school districts can control that matters for kids," Harris, of A+ Schools, says. "These evaluations should be about improvement and giving teachers meaningful feedback.

"But with any evaluation, if you're not improving, this is a high-stakes job, and unfortunately it sometimes does result in people being fired."

However, critics have questioned the independence of both of these organizations. According to a disclosure statement from the American Federation of Teachers, PFT's parent organization, the union gave PIIN $15,000 for a "member education program" in October and November 2012. PFT President Esposito-Visgitis said the money was used to educate the community on Pennsylvania's new voter-identification law.

Meanwhile, A+Schools lists the Bill and Melinda Gates Foundation as one of its donors. The foundation also donates money to the school district, including a $42 million grant that funded the district's "Empowering Effective Teachers Plan," through which the new teacher evaluations were developed.

"I think that group [A+Schools] had initially started out as ... something with a good intention. They were going to give parents an independent voice," Pittsburgh City Councilor Theresa Smith, the resolution's sponsor, said at a council meeting. "When you're receiving money from the same people as the school district, I don't think you're going to have an independent view."

Ultimately, Smith removed from the resolution the portion related to teacher evaluations, but the controversy surrounding them will continue.

"We took out some of the language regarding the teacher evaluations which I really didn't want to take out of this legislation," Smith says. "But I felt we needed to in order to make sure people understood this was something relative to a conversation about our schools."