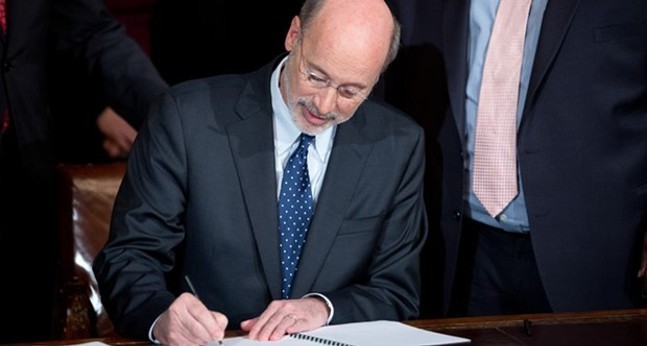 Gov. Tom Wolf has vetoed a bill that would have allowed anyone over the age of 18 who can legally own a firearm to carry a concealed weapon without a permit.

It also would have repealed a state law that banned the open carrying of firearms in Philadelphia.

In his veto message, the Democratic governor said the bill would “only exacerbate gun violence and jeopardize the safety of all Pennsylvanians.”

The bill, a top priority for gun rights groups, zoomed through the Republican-controlled General Assembly last  month. It passed the Senate 29-21 in early November, and the House 107-92 two weeks ago.

Under current state law, Pennsylvania gun owners 21 and older can only carry a concealed weapon if they successfully obtain a permit from their county sheriff.

But 21 states, from Arkansas to Vermont, already allow for concealed carry without a permit. Gun rights advocates argue it reduces redundancies for lawful gun owners, many of whom may have already undergone a background check, and that it affirms the rights guaranteed by the Second Amendment and the Pennsylvania state constitution.

“Their specious comments about dangerous gun laws is nothing more than demagoguery on a huge level,” Stolfer told the Capital-Star.

But Lott’s research, which argues more guns reduces violent crime, has been criticized by other academics. One 2017 study from Stanford University reached the exact opposite conclusion, finding that 10 years after states loosened their concealed carry laws, violent crimes, with the exception of murder, rose by 13% to 15%.

In an email, Adam Garber, executive director of the gun violence prevention group CeaseFire PA, said that “the General Assembly tried to make this and future holiday shopping seasons more dangerous by allowing anyone to carry a concealed firearm, no permit needed. While Governor Wolf’s veto thankfully will keep it from becoming law, none of us should think that’s good enough.”

In vetoing the bill, Wolf said he stands “with them, domestic abuse survivors and advocates, responsible gun owners, and victims of gun violence,” and echoed a call from Garber for the General Assembly to instead pass new laws restricting access to firearms, such as extreme risk protection orders or requiring reporting of lost and stolen guns.


Stephen Caruso is reporter for the Pennsylvania Capital-Star, where this story first appeared.