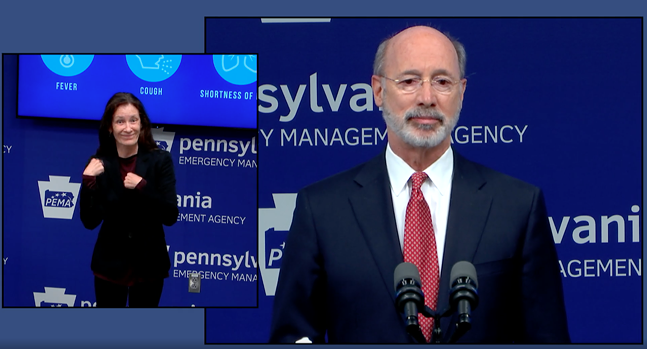 Screenshot from Governor Tom Wolf's address
Despite some outcries from the public and the president, Governor Tom Wolf (D-York) is not backing down from restrictions still in place to prevent the spread of COVID-19. In a statement, he threatened consequences for counties that don't abide by restrictions set by the state.

“I cannot allow residents in a red county to get sick because their local officials can’t see the invisible risk of the virus in their community,” said Wolf. “So I must, and I will impose consequences if a county locally lifts restrictions when it has not yet been given the go-ahead by the state.”

Wolf called the sacrifices Pennsylvanians have made "a quiet heroism," saying that "heroic acts deserve to be met not by surrendering, but by staying the course."

Wolf's comments were an apparent response to President Trump, and other elected officials, who have advocated for reopening the state more broadly. Parts of the statement moved the "yellow phase," a partial reopening, on May 8, and more will move to that status on May 15.


I won't sit back and watch residents who live in counties under Stay at Home orders get sick because local leaders cannot see the risks of #COVID19 and push to reopen prematurely.

Today I am announcing consequences for counties that do not abide by the law to remain closed.

On Monday morning, Trump tweeted about the status of Pennsylvania's reopening, saying, "The great people of Pennsylvania want their freedom now...The Democrats are moving slowly, all over the USA, for political purposes."

Some local politicians have pushed back at the restrictions, including in Beaver County, one of the only counties in Southwest Pennsylvania that is still in the "red phase" because of a severe outbreak of COVID-19 at the Brighton Rehab nursing home. Beaver County district attorney David Lozier has said that he wouldn't prosecute businesses that violate state shutdown restrictions.

In Wolf's statement, he announced that counties that don't abide restrictions set by the state will not be eligible for certain federal stimulus discretionary funds, and employees in those counties can choose to not return to work and still receive unemployment benefits. Additionally, individual businesses can face consequences; those that ignore restrictions won't qualify for business liability insurance, and restaurants that open for dine-in service could lose their liquor license.

The great people of Pennsylvania want their freedom now, and they are fully aware of what that entails. The Democrats are moving slowly, all over the USA, for political purposes. They would wait until November 3rd if it were up to them. Don’t play politics. Be safe, move quickly!