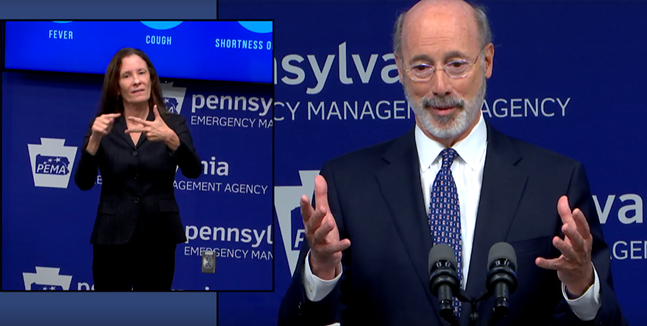 Screenshot
Gov. Tom Wolf addresses reporters during an online press conference on Fri., May 29.
Today, during an online press conference addressing the COVID-19 response, Pennsylvania Gov. Tom Wolf (D-York) announced that 16 counties throughout the state — including Allegheny County — will officially move from the yellow phase into the green phase. The move will take place at 12:01 a.m. on Fri., June 5.

In addition, counties currently in the red phase will move into the yellow phase at that time.

Wolf, who was joined during the conference by Pennsylvania Health Secretary Dr. Rachel Levine, says the decision to move Allegheny and other counties into the green phase was based on a reduction in new cases of COVID-19 patients and related deaths, as well as recommendations from medical and epidemiological experts.

While Wolf acknowledged that the green phase may seem like a “return to normalcy,” he asked that everyone sill remain vigilant. As explained in a previous Pittsburgh City Paper article, the green phase allows for businesses to reopen, including restaurants. Even so, large gatherings are prohibited and protective measures like working from home, social distancing, and wearing masks in public is still highly encouraged.

“It is important that we continue to act with caution, especially when we reopen,” Wolf said. 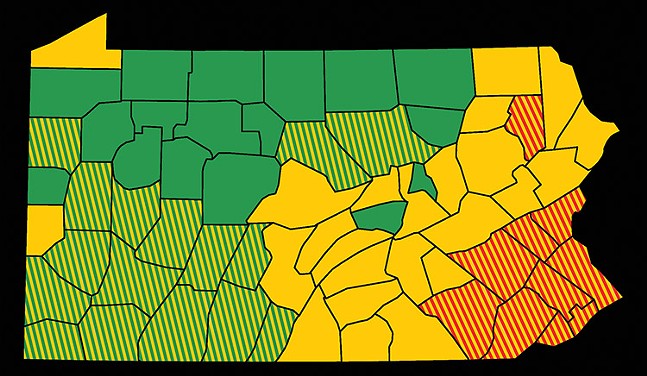 On Fri., June 5, 16 additional Pennsylvania counties (shown here in yellow-and-green stripes) will move to the green phase, and the remaining red counties (shown here in yellow-and-red stripes) will move to the yellow phase
The green phase is another step away from Wolf's shelter-in-place order issued to stop the rapid spread of COVID-19 and keep hospitals and other health care facilities from becoming overwhelmed. Wolf said that, at this time, he would like to avoid another shelter-in-place order, calling it “draconian.”

He said that testing will expand in order to be accessible to everyone, including at drug stores and retail pharmacies, with Dr. Levine adding that they hope to develop a rapid, accurate test that people could possibly do at home. In terms of testing overall, Wolf said the state is “in a better place now compared to four weeks ago.”

As for the possibility of a vaccine, Wolf does not see it happening any time soon.

He adds that while businesses are allowed to operate, owners and managers should still make sure they do so in ways that keep their staff and customers safe, such as sending sick employees home and sanitizing surfaces. When asked if there were any plans to enforce public health guidelines, Wolf said he trusted businesses and event organizers to “self-enforce” and to determine if they are “testing fate” by putting others at risk.

“You're playing roulette with the health of your employees and customers,” he said. “I don't know why you'd want to do that.”

In addition to businesses, Wolf said steps are being taken to reopen schools in the fall, which he believes will definitely happen with certain precautions, including smaller class sizes to allow for social distancing.

He also stressed the continued importance and effectiveness of wearing masks as people, including political leaders, have made a show of not wearing them in protest.

He then added that “racism is not right there, it's not right here,” and that everyone should “do everything to make sure the Commonwealth is welcoming to everybody.”

Wolf also addressed questions about the calls for House Speaker Mike Turzai (R-Marshall) to resign after Democratic house members were not informed that Rep. Andrew Lewis (R-Dauphin) had tested positive for COVID-19, even appearing on the House floor without a mask. The discovery has brought up questions of COVID-19 patients being allowed confidentiality even as they are putting others at risk.

When asked if he would immediately disclose if he tested positive for COVID-19, Wolf offered without hesitation, “Yes.”

Even as restrictions change, Dr. Levine says the most important thing for Pennsylvanians to remember is to “stay calm, stay alert, and stay safe.”
Wolf stressed that even as people become frustrated, following public health guidelines remains crucial.

“If we don't follow these guidelines, we're taking risks with that virus — that's the enemy,” he said.