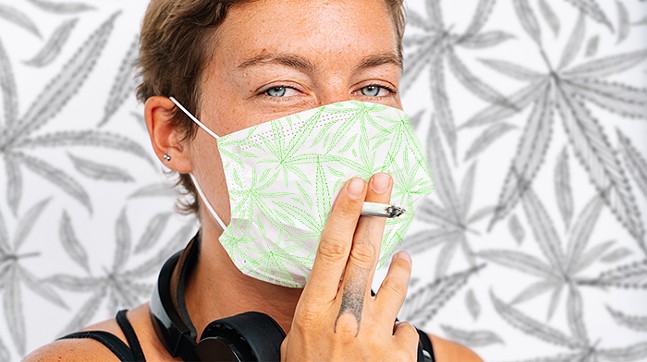 Photo illustration only: Pittsburgh City Paper does not condone the use of smoking of any kind while wearing a mask
Gov. Tom Wolf (D-York) reaffirmed his support for recreational marijuana today and called for legalizing cannabis as part his economic and social relief proposals in response to the coronavirus pandemic. The proposals include hazard pay for frontline workers, increased housing assistance, and funding for small business recovery, which is where recreational marijuana falls.

Wolf's suggested plan includes expanding loans and relief to small businesses with an additional $225 million through the COVID-19 Relief Statewide Small Business Assistance Program, as well as $100 million for the service industry, including bars, restaurants, and salons. To additionally aid the service industry, Wolf called for the general assembly to cancel or reduce alcohol tax for six months. Wolf's suggestion of legalizing recreational marijuana includes siphoning some of the revenue it generates towards small business funding.

"The governor is calling on the legislature to legalize recreational marijuana with the proceeds going to existing small business grant funding. Fifty percent of the funding would be earmarked for historically disadvantaged businesses," states a press release from the Wolf's office. "Along with the call to the General Assembly to pass legislation legalizing the sale and use of recreational marijuana, the governor proposes that a portion of the revenue be used to further restorative justice programs that give priority to repairing the harm done to crime victims and communities as a result of marijuana criminalization."


I'm calling on the legislature to legalize recreational marijuana, with the revenue going to:

At the same time, we must pursue policies that restore justice for individuals convicted of marijuana-related offenses.

Wolf is not the first Pennsylvania politician to suggest legalizing marijuana as part of COVID-19 relief. State Rep. Jake Wheatley (D-Hill District) proposed HB 2050 back in February, which would legalize recreational marijuana and clear the records of those currently or previously facing nonviolent drug charges. Marijuana legislation is frequently paired with restorative justice initiatives, like Wolf and Wheatley's proposals, to counteract the fact that Black adults in Pennsylvania are 3.6 times as likely as white adults to be charged with marijuana possession, according to the ACLU.

Lt. Gov. John Fetterman (D-Braddock) has also been a loud and frequent advocate marijuana legalization as a way to generate COVID-relief funding. However, Republicans, who control the state legislature, have not been open to the idea. In fact, last year Republican state House spokesperson Stephen Miskin equated legalizing marijuana to legalizing heroin.

This April, Wheatley told Pittsburgh City Paper that the economic burden the pandemic is having on the state could be enough to push legalization through the general assembly, even with historical Republican opposition.

"The demand on our tax system behind this pandemic, I think will be thus that we're going to be looking at all available options," said Wheatley in April. "I'm not pushing this just around the economics of it — I think it's just good policy in general — but I think the fact that it has the potential to have such an economic impact on our budget, and this budget is being so strained, I think we'll have a better chance within the next six months."

In his proposals, Wolf also emphasized the need for "protecting elections," and asked the general assembly to pass legislation allowing for mail-in ballots to be counted "as long as they are postmarked on election day and received by the Friday after the election."