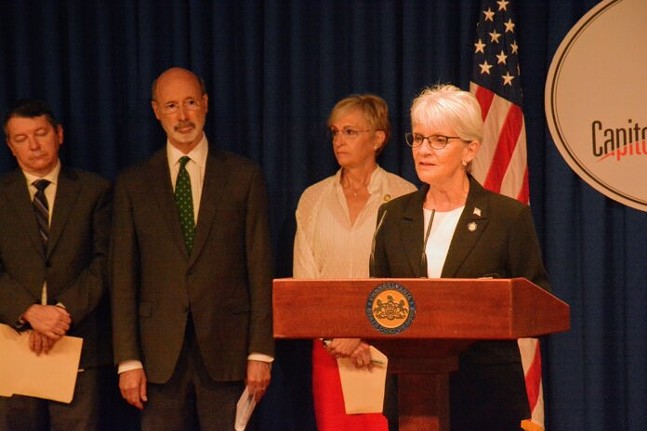 Capital-Star photo by Stephen Caruso
State Sen. Carolyn Comitta, D-Chester, speaks at a press conference on RGGI on June 14, 2021.
Gov. Tom Wolf proposed Monday to pour tens of millions of dollars from an initiative combating climate change back into communities set to lose out on the transition to a green economy.

The windfall would come from Regional Greenhouse Gas Initiative, or RGGI, a mandatory, market-based program in the United States to reduce greenhouse gas emissions. It involves collaboration between 11 northeastern and Mid-Atlantic states to cap and reduce CO2 emissions from power generators.

Legislation now before the state House and Senate would distribute about one-third of RGGI revenues to the communities that lose fossil-fuel jobs, with the rest going to the state Clean Air Fund, which pays for pollution mediation projects, as well as environmental justice projects and administration costs.

Two years ago, Wolf announced his plans to enter Pennsylvania into RGGI. The administration aims to have the regulations approved by 2022. States then sell credits to release carbon to power plant owners, who can only release as much carbon as they own credits for, reducing emissions.

This, Wolf and his allies argue, will fight climate change, the long-term human-induced increase of the Earth’s natural temperature that negatively impacts the environment.

Pennsylvania is one of the leading energy-producing states in the country, according to federal data. As such, it is also among the top emitters of carbon pollution in the country.

By putting a price on pollution, proponents argue they can cut down on emissions through the market. However, opponents argue the additional cost of carbon credits could kill off the last of Pennsylvania’s ailing coal-fired power generation industry, which has struggled to compete with low cost natural gas.

Wolf pointed to the closure of Cheswick Power Plant, a coal-fired power plant outside Pittsburgh, to back his proposal of joining RGGI.

Last week, GenOn Holdings, a Houston-based energy company, announced that Cheswick, plus one plant in Ohio and one in Maryland, would shutter this fall.

“In those plants, in those communities, those workers are not going to get any help from anybody for any transition. Whereas if we do what we are doing here in Pennsylvania, and we succeed, Pennsylvania will have the funds to actually address the needs of transitioning workers,” he said Monday.

Environmental groups, such as PennFuture, also threw their weight behind Wolf’s proposal.

“This legislation guarantees that significant investments will be made in frontline and environmental justice communities across the Commonwealth,” Jacquelyn Bonomo, president and CEO of PennFuture, said in a statement.

But despite the closures, the unions that represent thousands of fossil fuel workers were skeptical of Wolf’s proposal.

“I don’t think it’ll do anything to replace the jobs that are lost by the building trades members,” Frank Sirianni, president of the Pennsylvania Building Trades Association, told the Capital-Star.

Their hopes were instead on a bill to prevent Pennsylvania from entering RGGI at all, which passed the state Senate 35-15 Monday, more than the two-thirds majority needed to override Wolf’s veto pen. Wolf vetoed a similar bill last year.
Shaniece Holmes-Brown is a reporter for the Pennsylvania Capital-Star, where this story first appeared. Capital-Star staff writer Stephen Caruso contributed reporting.