Gov. Wolf calls for ICE to cease all arrests that result in child separation in Pa. 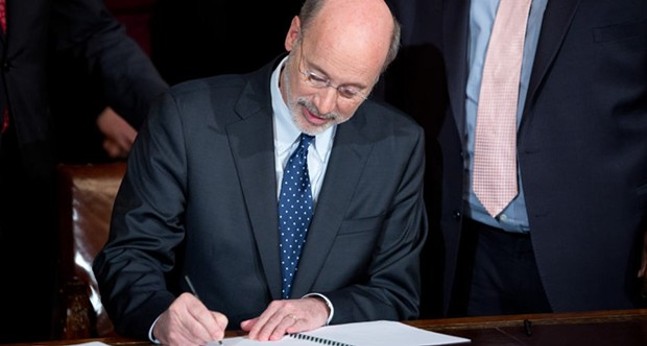 Governor Tom Wolf announced Monday that he is calling for U.S. Immigration and Customs Enforcement (ICE) to end all arrests that result in the separation of children from their parents in Pennsylvania.

In a letter to Kevin McAleenan, acting secretary of the Department of Homeland Security (DHS), Wolf demanded that ICE produce a policy ensuring the well-being of children in Pennsylvania. Wolf called for ICE to stop all child separation activity immediately if such a policy does not exist.

Wolf shared the letter in full on Twitter, where he wrote, “If @ICEgov can’t or won’t protect the welfare of children in Pennsylvania, they should stop the raids that are separating them from their parents.”

If @ICEgov can’t or won’t protect the welfare of children in Pennsylvania, they should stop the raids that are separating them from their parents.

Wolf said his administration learned that ICE recently detained migrant parents from three families and separated them from their children. The DHS “failed to ensure the children in these families had adequate temporary guardianship despite their parents being detained,” Wolf wrote.

In addition to asking McAleenan to provide information about ICE’s policies on child separation, Wolf requested details about each of these recent arrests.

“I will continue to explore every legal avenue to protect children in Pennsylvania if your agency is not capable of doing so,” Wolf wrote.

According to a report from Syracuse University, Pennsylvania’s ICE agents carry out a higher percentage of arrests per undocumented immigrant than any other state.

Wolf also reiterated his stance against ICE’s detention of children at an immigrant detention center in Berks County. Hundreds of Pittsburghers, including Mayor Bill Peduto, attended a protest in Schenley Plaza last month to call on Wolf to close the Berks County facility altogether.