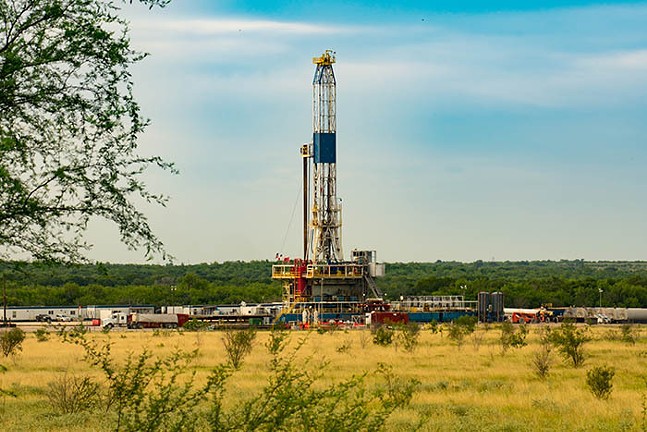 Photo: IStock
A natural gas drilling rig
With war raging in Ukraine, Democratic Gov. Tom Wolf and Pennsylvania Republicans are in a war of words over how Pennsylvania and the United States fit into the international energy market.

In a slew of legislative memos and press releases earlier this week, top House Republicans Rep. Daryl Metcalfe (R-Butler), Rep. Stan Saylor (R-York), and Rep. Seth Grove (R-York) all called for the expansion of natural gas drilling and the extension of pipelines through neighboring states that have opposed their construction.

In a letter to Democratic Gov. Tom Wolf on March 1, Metcalfe, chairperson of the House Energy and Environmental Resources Committee, also called for Wolf to ban the import of Russian energy to America.

He added that Wolf should “be a voice of encouragement to the Pennsylvanians yearning to share our liquified natural gas and energy with those in need.”

However, little to no Russian gas actually reaches American shores, according to the federal Energy Information Administration. The United States is a net gas exporter, importing 2.55 trillion cubic feet of natural gas in 2020, and exporting 5.28 trillion feet of gas, according to the EIA. And of the imports, 98% of the gas comes from Canada.

In 2020, the U.S. did import almost 200 million barrels of Russian crude oil, which can be refined into gasoline, according to the EIA.

That’s about 7% of total U.S. crude oil imports. But while Pennsylvania is among the top natural gas producing states, it produces very little crude oil, according to the EIA.

Meanwhile, U.S. gas exports, which leave by both pipeline and ship, have grown over the past decade.

In the past, China, Japan, and South Korea have been among the biggest importers of American natural gas, according to the EIA. But U.S. gas exports to Europe have begun to outpace Asian exports in recent months, according to Reuters.

That increase matches rising energy prices in Europe, which imports most of its energy needs from Russia. In 2021, Russia made up 45% of European Union gas imports, according to the International Energy Administration.

In a response to Republicans Thursday, Wolf encouraged Metcalfe to review the data "if you are confused about any of these points.”

Wolf added that Metcalfe, a vocal climate change skeptic who has hosted natural gas-linked experts to downplay global warming, was seizing on a “humanitarian and geopolitical tragedy playing out in Ukraine in service of your crusade to increase the profits of the natural gas industry and stand in the way of action to address climate change.”

“This is no time for small-minded ideologues or armchair energy experts to attempt to capitalize on tragedy to benefit their benefactors,” Wolf added.

Dan Grossman, an associate vice president of energy transition at the Environmental Defense Fund, told the Capital-Star that the long-term solution to petro-dictators who gain power by controlling energy production is moving the world economy away from fossil fuels and toward renewable power.

In the short term, however, he argued that America’s regulatory standards, which Metcalfe and others decried this week, were instead important to keep U.S. gas imports relevant.

He pointed back to 2020, when French utility company Engie pulled out of a deal with a Texas driller to import $7 billion of gas because the company’s environmental standards did not align with France’s.

In Europe’s own backyard, Grossman added, is Norway. The Scandinavian nation can produce gas with environmental standards that could match or beat American imports, Grossman said.

“What we can’t afford to do is backtrack on our own environmental standards, because that will hurt the long term viability of American gas,” Grossman said.

The debate won’t be going away. In a response to Wolf’s letter on March 3, House Republican spokesperson Jason Gottesman pointed to estimates that 40% of the Russian government’s budget comes from energy sales.

Therefore, “any amount of oil and gas coming into the United States from Russia is too much,” and argued that “pro-environmental lobby Democrat leaders like President [Joe] Biden and Gov. Wolf” should “get out of the way.”
Stephen Caruso is a reporter for the Pennsylvania Capital-Star, where this story first appeared.