In August, Wolf said Pennsylvanians weren't ready for recreational marijuana, now he wants to see a serious discussion about its possibilities. 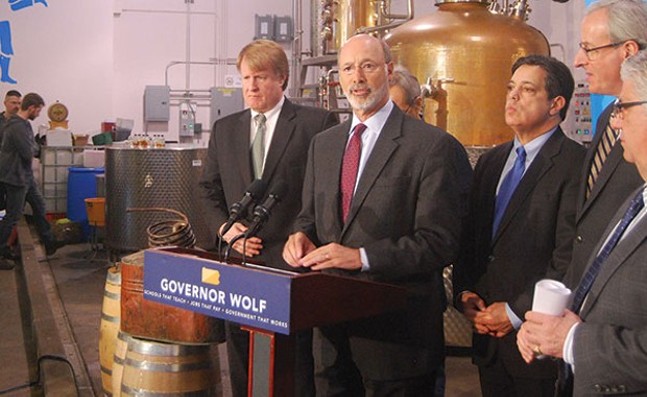 CP photo: Ryan Deto
Gov. Tom Wolf {Center)
During a Twitter Q&A on Wednesday, Pennsylvania Gov. Tom Wolf (D-York) hinted at a change of heart in his stance toward recreational marijuana legalization in the commonwealth.

“I think it is time for Pennsylvania to take a serious and honest look at recreational marijuana,” tweeted Wolf in response to a question asking when Pennsylvania would catch up to other states in this regard.

More and more states are successfully implementing marijuana legalization, and we need to keep learning from their efforts. Any change would take legislation. But I think it is time for Pennsylvania to take a serious and honest look at recreational marijuana. https://t.co/LHOmYKzMyp


California, Washington, and Colorado have dispensaries where anyone can purchase legal marijuana. After a successful ballot initiative, Michigan legalized marijuana on Dec. 6. New Jersey’s recreational weed bill cleared committee recently and is one step closer to becoming law. Delaware isn't far behind.

Before the election in November, Wolf was more sheepish on recreational marijuana, going as far to say in an August interview with KDKA radio that he didn't think “citizens of Pennsylvania are ready for it.” He said he was happy with the progress and reforms to the state’s medical marijuana program, but didn’t indicate openness to backing recreational use.

Of course, a poll taken in September 2017 showed that 59 percent of Pennsylvanians do support recreational marijuana. Advocates like Lt. Gov.-elect John Fetterman (D-Braddock), Auditor General Eugene DePasquale (D-York), and Pittsburgh Mayor Bill Peduto have pushed recreational marijuana as a way to bring in hundreds of millions of dollars into state coffers.

“It is a big shift in position for Gov. Wolf,” says Goldstein. “Previously, he was in the wait-and-see mode. Maybe now he sees that recreational marijuana is a good choice.”

Goldstein thinks Wolf’s latest statement can be influential in moving others towards supporting recreational marijuana.

“Pennsylvania was kind of this one standout state,” says Goldstein. “And everyone was looking at Gov. Wolf's opinion, and that was kind of holding back some progress.”9

Pennsylvania state Rep. Jake Wheatley (D-Hill District) introduced a recreational legalization bill earlier this year. Goldstein hopes the governor can get behind that or a similar bill.

The Pennsylvania House and Senate are both controlled by Republicans, though less so than before thanks to Democratic victories in the midterm elections. Typically, Republicans are less amenable to marijuana reform than Democrats, but Goldstein told City Paper in November he believes there is room for bipartisan support.