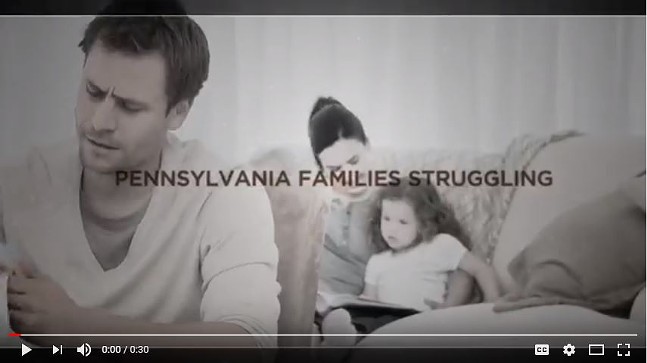 Screenshot of Scott Wagner ad
Paying bills is a struggle for many families in Pennsylvania, and the guy in Scott Wagner's July 10 campaign ad knows it.

The Republican gubernatorial candidate's latest spot opens on a (presumably) Pennsylvanian father agonizing over bills, while his wife and child read on the couch behind him. The words "Pennsylvania Families Struggling" are superimposed over the scene.

Stock video in campaign ads is nothing new, but according to the stock video site Motion Elements, this footage (“Stressed Man calculating his bills”) was filmed in Cape Town, South Africa with South African actors.

"One of the first things we do is check if it is shot in a foreign county, especially if you are implying in your ad that the issue is local," says Lawrence.

But, Lawrence says he ensures stock footage is shot in the U.S.

Wagner spokesperson Andrew Romeo said it was normal for political campaigns to use stock images and video, regardless of their country of origin.

"Campaigns use stock photos all of the time in commercials," said Romeo. "If the Pittsburgh City Paper was really interested in informing its readership on substantive issues, it would focus on Tom Wolf's plan to cut $67.9 million from the Pittsburgh City School District."

Lawrence bristles at the idea that campaigns merely use stock footage from where ever and don't try to use U.S.-shot footage.

"We pretty much have a standard rule that we don't use stock footage from foreign countries," says Lawrence. "And these days it is easier and easier to tell where it is from."

"Governor Wolf has fully restored the $1 billion cut to education made under the Corbett administration that led to teacher layoffs, larger class sizes, and cuts to important programs," said Melena in a press release.

Wagner became a millionaire running his York County waste-management business. The price of the stock footage is $45. Many stock videos on Motion Elements are from other countries, but there are many options of U.S.-filmed videos.

Wagner has continually attacked Wolf on taxes during his campaign. During a May 20 interview on with Harrisburg TV station WHTM, Wagner said his “job is to protect Pennsylvanians’ paychecks.” In an April Wagner released a press release titled "Wagner Wants To Put Pennsylvanians To Work, Wolf Wants To Keep Them On Welfare."

The full ad is below.