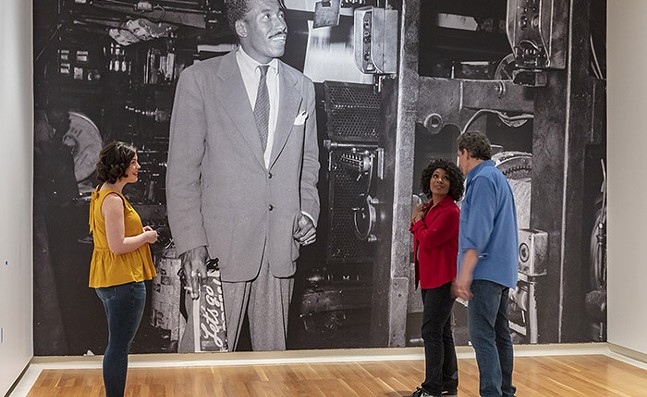 Photo: Tom Little
Installation views of Gordon Parks in Pittsburgh, 1944/1946 at Carnegie Museum of Art, 2022
A photo on display at the Carnegie Museum of Art shows a dozen workmen looking out from a dingy freight elevator, their eyes trained directly at the camera. Their faces show resolve. The year is 1944 and these men work in the Pittsburgh Grease Works, a hulking operation that took up two whole blocks in the Strip District and was the largest lubrication manufacturing facility in the world.

Bear in mind that Pittsburgh was considered the “Arsenal of Democracy” at the time. Approximately 40% of the population worked in the mills, which pumped at full throttle to produce 90 million tons of steel for the Allied Powers during World War II. The city prioritized the war so much that it delayed implementing its inaugural smoke control legislation for five years. As they used to say, “Smoke means jobs.”

Photo: Tom Little
Installation views of Gordon Parks in Pittsburgh, 1944/1946 at Carnegie Museum of Art, 2022
Gordon Parks in Pittsburgh, 1944/1946, the latest exhibit to open up at the CMOA, is an exciting window into World War II-era Pittsburgh. The CMOA worked with the Gordon Parks Foundation to organize the show, which coincides with the release of a book published by Steidl. The photos are an insight into Parks’ development, as well as a corrective to how the homefront has been visualized.

Back to those men in the elevator. Parks pictured them twice. He wanted to make clear that these workers produced the lubricants that the Allies relied on to keep their tanks, locamotives, submarines, and bombers running smoothly.

In the second photo, the freight doors close in on the workers from above and below like a set of jaws, evoking the idea that industry consumes its workers. Ever the expert chronicler, Parks photographed with great deliberateness and left little to chance. He clicked the shutter just before the doors closed fully, making visible the worker’s faces. The photos function as a portrait, and their sequencing gets at the numbing nature of manual labor, the notion that one is trapped in a daily cycle — work hard, get dirty, go home, repeat.

Parks was a great chronicler of Black life and, by age 29, built a name for himself as a trailblazing photojournalist when he won a fellowship with the Farm Security Administration. As Life magazine’s first Black staff photographer, Parks sought to draw the nation's attention toward segregation and the Civil Rights movement. According to the Gordon Parks Foundation website, Parks viewed the camera as a “weapon” against racism, poverty, and all forms of inequality.

Later, Parks developed into a Renaissance man, writing novels and memoirs, composing music, and directing numerous films, including so-called Blaxploitation classics like Shaft and Superfly, as well as The Learning Tree, a 1969 work regarded as the first major Hollywood film directed by an African American.

Parks wasn't working for Life when he visited Pittsburgh, however. He was contracted to produce promotional material for Standard Oil, which sought to repair its public image after Congress started investigating its business ties with Germany. In response, they launched a sprawling ad campaign that included chemistry demos in department store lobbies and a star-studded photography team directed by the FSA’s Roy Striker. He assigned Parks to photograph the Pittsburgh Grease Works in 1944, and again in 1946, to produce material for leaflets and photo exhibits that Standard Oil mounted in galleries nationwide.

Though the context of Parks’ job may complicate these pictures, it also explains them. They are the product of a balancing act; Parks clearly endeavored to both fulfill the assignment and subvert it. Certain boxes had to be checked and certain compromises had to be made. The injuries, altercations, and despair that likely prospered in such harsh working conditions are absent from Park’s photos.

However, it's worth noting that photojournalists of the era were not focused on the rights of workers, either. America was at war and muckraking was not in vogue. In fact, a lot of Life’s wartime coverage — such as Margaret Bourke White’s feature on working women — strikes a more Romantic and Propagandistic tone than Parks’ photos do.

Many of the photos Parks took were staged, but not to their detriment, and while a few photos do come off as contrived, the majority testify to the worker’s true humanity.

Viewed as a whole, Parks' photos ultimately honor the plant’s Black workforce by making visible their predicament and gesturing to what he could not directly depict. The hierarchy and segregation of the Grease Works become clear in a staged candid of the plant’s management. In it, five white men in fitted suits hover around an ornate desk while they pretend to discuss important things. Their shirts are as clean as bleach. The scene serves as a jarring contrast to the photos of Black workmen handling lye and red-hot grease with little to no protective gear.

“Most of the personnel within the manufacturing units were Negroes,” Parks wrote in a letter to Striker. “An attempt was made to minimize my coverage of [them] so that all nationalities might be integrated into the story.”

At the core of this exhibit is the notion that visibility is power. “Had it been left up to politicians, military officers, and businessmen, this vital Black workforce that contributed to the production of five million pounds of ‘Eisenhower grease’ during World War II would’ve gone unnoticed and unrecognized,” writes photographer Latoya Ruby Frazier in an essay for the exhibition’s accompanying book.

Parks was well aware of how people can be rendered invisible, and he worked to ensure these men were not. We’re fortunate that he photographed them, regardless of who was paying his bills.
Gordon Parks in Pittsburgh, 1944/1946. Continues through Aug. 7. Carnegie Museum of Art. 4400 Forbes Ave., Oakland. Included with museum admission. cmoa.org