Mihalek is currently running for state House in Upper St. Clair. She also ran as a Republican for state Senate in 2015. 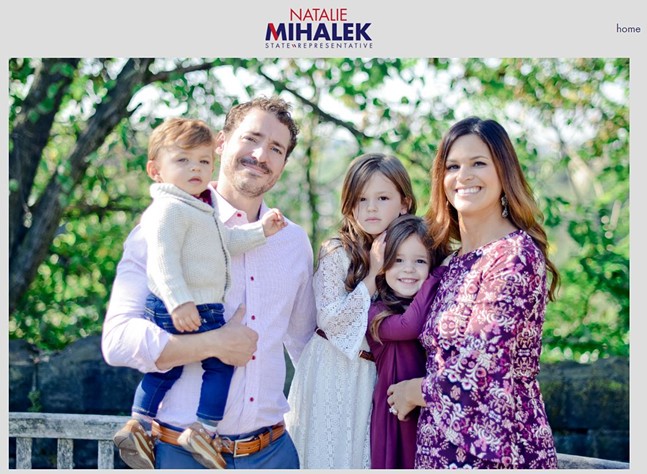 A June Morning Consult/Politico poll shows just 37 percent of registered voters support the tax cuts, down from 44 percent in April.

But Republicans believe sharing stories of everyday citizens who have benefited from tax cuts can move the needle on the issue. That was the thinking behind a recent ad for U.S. Rep. Brian Mast (R-Florida).

Natalie Mihalek praises the tax cuts for providing “peace of mind” and helping her take care of her family.

“As a working mom, I am thrilled with the middle-class tax cut,” Mihalek says in the ad. “My paycheck is bigger every two weeks and I'm one of the millions of Americans who got a bonus. … Thank Congressman Mast for cutting our taxes and tell him to keep fighting for middle-class families.”

But Mihalek is far from an everyday Pennsylvanian, happy about her bonus and tax savings. She is a Republican Party member who is currently running for Pennsylvania State House District 40 in Upper St. Clair.

Mihalek also ran as a Republican for the open state Senate race in District 37 back in 2015, losing out to Guy Reschenthaler. Even back then she was an open proponent of tax cuts and “protecting the taxpayer,” according to PoliticsPA.

The Mihalek campaign did not respond to request for comment.


The Florida congressional ad was paid for by American Action Network. The ad doesn’t mention that in addition to being a working mother, Mihalek is currently running for elected office. The ad also fails to mention that she is not a Florida resident.

This isn't the first time Republican-linked ad campaigns have portrayed Southwest Pennsylvania Republican candidates and elected officials as everyday citizens. In February, TribLive reported how Republican Gateway School board member Mary Beth Cirucci appeared in an ad attacking U.S. Rep. Conor Lamb (D-Mount Lebanon) over his opposition to the tax cuts. That Congressional Leadership Fund ad did not mention that Cirucci was a GOP elected official or how she was working for state Rep. Eli Evankovich (R-Murrysville) at the time.

The Mihalek congressional ad also uses the same photo of her and her family that is currently on Mihalek’s campaign website. She writes on her campaign website, “As a working mom, I am the living breathing example of the middle class family that other politicians purport to represent."

According to her LinkedIn page, she works as an Assistant Vice President at PNC and owns her own law firm. The job-seeking site Indeed estimates assistant vice presidents at PNC make about $74,000 a year.

Mihalek is raising three young children with her husband Jeremy, who works as a branch manager of a nursing home. According to job-seeking site Glassdoor, nursing-home branch managers in Pittsburgh make $56,000 a year.

Combining those estimated salaries totals $130,000 household income, even without accounting for supplemental income from Mihalek's private law firm. According to census figures, median household income in the Pittsburgh region is $54,000.

Mihalek's opponent, state Rep. candidate Sharon Guidi (D-Peters Township) issued a statement to City Paper, saying regardless of the ad, Mihalek is wrong to boost the tax cuts since they haven't helped most Pittsburghers.

“The tax cuts have disproportionately benefited the wealthiest Americans, yet Congress cannot find funding for important services that the middle-class families of the 40th District rely on,” said Guidi. “I’m knocking on doors everyday and listening to what matters most to voters, and they are worried about quality education for their children, affordable health care for their family, and security and dignity for the seniors in our community.”

Update: The Pennsylvania Democratic Party released a statement in response to Mihalek appearing in a Florida Congressional ad. PA Dems spokesperson Brandon Cwalina said Mihalek is "working for millionaires in Florida, all the while pretending to be something she's not." He said voters deserve an "honest" representative and should support Guidi in the 40th Distict race.

“The GOP tax plan Mihalek touts while pretending to be a Floridian and shilling for a Republican politician is the very same one that is hurting working Pennsylvania families by increasing their taxes, stripping them of their health care, and laying the burden of debt on their children," said Cwalina in a statement.