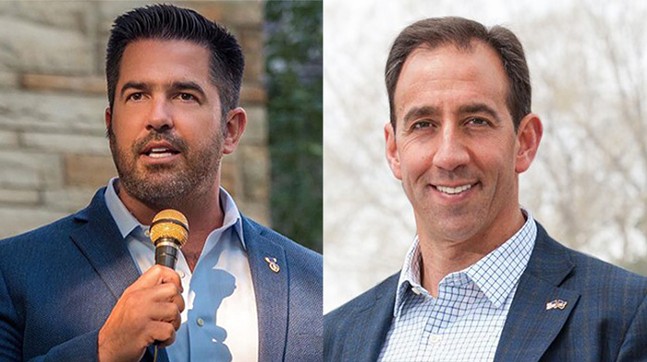 Photos: Courtesy of the campaigns
Sean Parnell (left) and Jeff Bartos (right)
The Republican primary contest for Pennsylvania’s open U.S. Senate seat is just a few months old, but it’s already testing candidates on who can be seen as more conservative and who is more aligned with former President Donald Trump.

Two candidates — army veteran and author Sean Parnell (R-Ohio Township) and businessman Jeff Bartos (R-Montgomery) — have already traded barbs over each other’s past support for Trump adversaries, and those attacks continue after Pittsburgh City Paper discovered that Bartos gave money to Democrats in the past, and he praising Hillary Clinton in 2014.

According to Federal Election Commission fillings, Bartos donated $1,000 to the Democratic Senatorial Campaign Committee in 2011. And, in an interview with the Philadelphia Inquirer in March 2014, Bartos spoke about his time as an intern for Democratic President Bill Clinton, describing the Clintons as “incredibly approachable,” and saying Hillary Clinton had been unfairly maligned.

“Mrs. Clinton gets a bad rap for being distant,” said Bartos in 2014 when asked to describe the Clintons. “She couldn't have been nicer to a 20-year-old unpaid staffer. … We had a birthday party for her chief of staff, and she helped me clean up — pick up the plates, throw them in the trash.”

The Clintons, especially Hillary Clinton, have been targets of conservative media for decades, and still regularly riles up Trump’s base when she makes media appearances.

When approached with this information about Bartos, Parnell campaign spokesman Ian Prior criticized donations by Bartos to Democrats and his kind words for Hillary Clinton.

“First, we learn Jeff personally donated to Democrats who supported impeaching President Trump,” says Prior in a statement to Pittsburgh City Paper. “Now, we find out Jeff worked for Bill Clinton and publicly heaped praise on Hillary Clinton. It sure sounds like Jeff was #ReadyForHillary.”

Bartos campaign spokesman Conor McGuinness responded to the Parnell camp saying that the campaign is grasping at straws and brought up Parnell’s past vocal criticism of Trump.

"Looks like Sean Parnell is grasping at straws already to cover his never-Trump record — Jeff Bartos has raised and donated hundreds of thousands of dollars to elect Pro-Trump Republicans,” says McGuinness in a statement. “Sean Parnell called Donald Trump a racist, divisive, and sided with liberals in demanding President Trump's tax returns."

Most of Bartos' political donations are to Republicans, and in 2020 he donated to pro-Trump politicians like U.S. Reps. Elise Stefanik (R-New York) and Byron Donalds (R-Florida). But notably, Bartos has also donated in the past to several conservative politicians who have clashed with Trump. Bartos has donated several times, with thousands of dollars over the years to U.S. Sen. Pat Toomey (R-Lehigh), who voted to convict Trump during his impeachment trial. (Toomey is retiring at the end of 2022.) In 2015, Bartos donated $2,700 to U.S. Sen. Marco Rubio’s (R-Florida) presidential campaign. Parnell also had past support for Rubio.