Gonzo: The Life and Work of Dr. Hunter S. Thompson

A new documentary looks back at the full-tilt career of the wild-man journalist.

Alex Gibney's recent documentaries -- Enron: The Smartest Guys in Room and Taxi to the Dark Side, a dissection of the war on terror -- have won accolades for compressing complex data on thorny, seemingly dry issues into informative, captivating films. The infamously outrageous writer at the heart of Gibney's latest film, Gonzo: The Life and Work of Dr. Hunter S. Thompson, is a considerably more entertaining subject, if still somewhat complicated.

If the fantasy boomer -- the one who claimed every rebellion from Free Speech through Watergate -- had a journalist hero, it was Thompson, he of the aviator frames, archly tilted cigarette and piercing stare that belied how many controlled substances had been ingested. A literary, political and cultural trailblazer, he seemed to capture the era's zeitgeist with an extra-sharp pen -- from hopeful psychedelic adventurer to outraged citizen, eventually emerging from the 1960s haze in bitterness, cynicism and retreat.

Gonzo is a laudatory profile, though it can hardly be a strictly golden-hued hagiography; after all, Thompson's misdeeds and flaws propelled his stardom. ("A walking monument to misbehavior," quips NBC's Brian Williams.)

Much of the film focuses on the highlights of Thompson's career, beginning with his 1966 book Hell's Angels, which helped kick-start a new style of participatory journalism. Thompson worked steadily for a number of publications, including the nascent rock-and-politics magazine Rolling Stone. But it was a throwaway assignment for Sports Illustrated that sparked his definitive wild-man work, Fear and Loathing in Las Vegas. The demented 1971 road trip to Sin City was a tour de force, a tour de mescaline -- a twisted account of the misplaced American Dream and Thompson's lament that "the wave" of '60s promise "had rolled back."

That dorm-room staple was followed the next year by Thompson's most blistering work: his savage takedown of presidential politics, Fear and Loathing on the Campaign Trail. Thompson, an outsider on temporary assignment, could afford to burn bridges -- both on the press bus and among Washington players. Frank Mankiewicz, a McGovern campaign strategist, is seen in historical footage describing Fear and Loathing as the "most accurate and least factual" account of the election season.

Thompson's legendary drugs-and-alcohol-soaked lifestyle took no break for work. Seen through today's lens of liability, zero tolerance and bottom-line-driven corporate media, Thompson's crazed antics seem as quaintly retro as pressmen wearing fedoras. Indeed, as folks fondly reminisce, you get the sense that the idea of somebody like Thompson is easier to embrace and celebrate than actually dealing with the volatile man himself.

A savvy observer of popular culture, Thompson nonetheless missed the oft-repeated public lessons about fame. The notoriety he actively pursued eventually interfered with his reporting, costing him useful anonymity and reducing him to a caricature he was trapped into repeatedly playing.

Yet even Thompson's flame-out was spectacular, bizarre and eminently quotable. In 1974, he travelled all the way to then-Zaire on Rolling Stone's dime to blow off covering the Ali-Foreman boxing match. By the mid-1970s, Thompson had stopped working full-time and surrendered to simply being Gonzo, holding court at his Aspen lair. He had literally become a cartoon figure, instantly recognizable as "Uncle Duke" in Garry Trudeau's "Doonesbury" comic strip.

The myth may have triumphed, but not before the man left an impact. Gibney's previous two docs used singular events to stand in for larger cultural shifts. So I was surprised that in a two-hour-long film nobody elucidated how Thompson's much-publicized free-wheeling style of reporting and writing helped, in part, to create the flashier, personality-driven mainstream media we embrace today. (That doesn't include just colorful ink-stained wretches at alt-weeklies, but also The Daily Show, cheerfully biased, first-person features, and even Maureen Dowd's snarky editorials in The New York Times.)

In the wake of this year's hyper-stage-managed presidential conventions, covered endlessly but with little depth, critique or humor by the complacent media, one wishes a drug-crazed, anarchic, bullshit-calling cowboy-journalist would smash through the blue-screen illusions. (In a pinch, Thompson's 1972 jibe is an evergreen: "Jesus, how low do you have to stoop in this country to be president?")

Some colleagues and family describe Thompson's 2005 suicide as a "so like Hunter, going out on top" act. But his first wife, Sandy, who lived with Thompson through his most productive years, demurs, and with some larger regret: "He was nowhere near the top ... but this was a time when a together Hunter Thompson could have made a difference in this country." 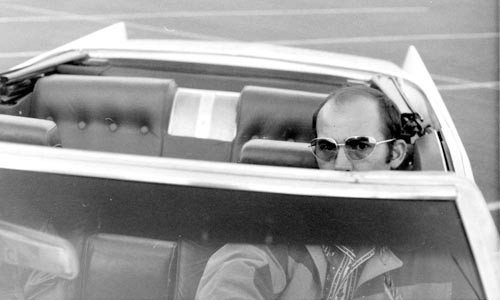