At this point, Chinese food -- or Chinese-American food, we should say -- is almost as American as the proverbial apple pie. There's nothing exotic about it; it's as assimilated and familiar as spaghetti (which is itself descended from Chinese noodles).

But if you think outside the takeout box about the allure of Chinese restaurants, there's a lot more to it than General Tsao. The tradition of sharing, first of all: At no other restaurants, save a few country- or Amish-style places, is it de rigeur for diners to pass around their entrees. There's a certain comfortable cultural otherness, as well: gold and red, colors symbolic of good fortune, are used freely in a way that other American restaurants, both modest and ambitious, are too cautious to attempt. Add in fishtanks whose residents are dinner, not decoration, and sushi and liquor bars, and you've got a dining experience that stands alone.

This is what lured us to Robinson for a meal at an otherwise nondescript suburban Chinese place. What set this one apart was that we'd heard it had been redone in a retro Chinatown style, and that it offered the Holy Grail of Chinese dining, dim sum, not just on special weekends, but every day.

Weekends do feature special dim sum -- roaming carts from which you grab steamer baskets as they pass -- but weekdays include a stand-alone menu with 23 dim sum options. The descriptions offered little to go on, so we adventurously ordered almost all of them. It took a while for some to arrive, but we began spinning our table's built-in lazy Susan as soon as the first dumplings and egg rolls (Thai-style, as it happened) were served.

One of the interesting, and challenging, things about dim sum is that sweet and savory coexist: Steamed sponge cake with pine nuts, which is just as dessert-y as it sounds, is as likely to be served before as after toro cakes, which are dense slabs of starchy root vegetable, mildly flavored on their own, but delicious with the slightly sweet dipping sauce. We quickly learned to embrace the taste-bud roller coaster of never knowing whether the next bite would bite back or demand an accompanying sip of tea.

We were almost uniformly satisfied. The sweet dim sum were pleasant breaks in the savory stream of dumplings and stuffed buns. Textures also varied, from tender crystal shrimp dumplings to flakier-than-flaky golden barbecue pork crisp. Steamed beef balls were much lighter than the name suggests, with bright seasonings. Seafood dumplings were a particular highlight, with a filling reminiscent of a white sauce, almost delicate within the wrapper. There were a few quibbles -- a number of dumpling wrappers stuck to their steaming baskets, two bowls of dipping sauce were plainly inadequate for more than a dozen different dim sum, and occasional dishes erred on the bland side -- but at two or three dollars for nearly every three-piece serving, who minds a dud or two?

Nearly full from small dishes, we nonetheless sampled the fare from Golden Palace's tanks full of striped bass, crabs and lobsters. Crab with spicy salt sounded much better than it was. The seasoning was on the outside of the shell, which meant that many bites of the sweet meat within were underseasoned, and the occasional bite was like sucking on a salt cellar. In between were the exposed joints at the ends of the legs, which showed signs of frying, and balanced tender meat with crisp batter.

Steamed striped bass was a different story. The whole fish, which arrived last of all our food, was cooked perfectly with copious ginger and cilantro and served in a very light, soy-based sauce. Through these aromatic flavors, the freshness of the fish shone through, and our chopsticks picked the bones clean of tender meat.

A friend's more traditional Chinese-American dishes, chicken with broccoli and sweet and sour chicken, were standards of their type. Nonetheless, Golden Palace's dim sum is the most readily available around and an excellent introduction to the form, and the fresh seafood is fine. For those looking to explore Chinese cuisine beyond the standard American restaurant menu, Golden Palace is a good place to start. 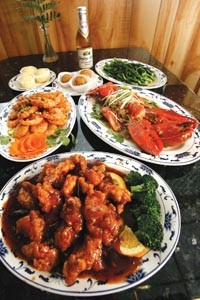