Going her own way, Esperanza Spalding signals a new moment in jazz 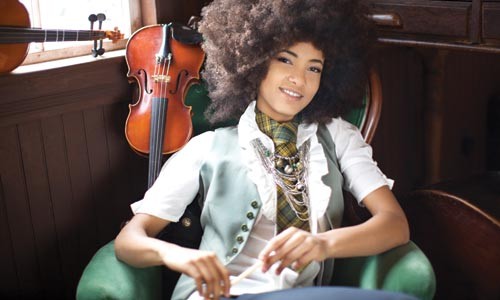 Esperanza Spalding's presence on the jazz scene is akin to the moment in pop music that occurred in 1984, the year she was born: a year that produced Michael Jackson's Thriller, Prince's Purple Rain and Tina Turner's often overlooked Private Dancer. Motown may have produced the first black mainstream pop artists -- Jackson included -- but they were still seen mostly as black artists doing pop music. In 1984, Jackson, Prince and Turner were pop artists who only happened to be not white, and who redefined the parameters of a new era. They didn't take Motown into a new age -- they made new audiences basically forget Motown existed.

The 25-year-old Spalding could've taken the Norah Jones route to Blue Note, which still attempts to present itself as the label of jazz legitimacy. Instead, she has carved out her own identity not only in jazz, but in the larger musical landscape, welcoming the votes of authenticity from the Dead Trumpets Society, but not relying on them for esteem.

While jazz great McCoy Turner called her "the real thing" in a March New Yorker profile, purist Wynton Marsalis declined comment. The profile notes that Spalding is "diametrically opposed" to Marsalis' philosophy of jazz -- and he must hate that she wears a nappy fro, loves hip hop and isn't above wearing fashionably tattered jeans to her performances.

An autodidact and prodigy, the homeschooled Spalding earned an instructor position at the Berklee College of Music before she was legally old enough to drink. Spalding taught herself piano and violin by ear before going on to master many other instruments, including the upright bass. The Portland native of African-, Asian-, Native and Spanish-American descent released her first album, Junjo, in 2005, when she was 20 years old. Her second album, Esperanza, is the best-selling international jazz release from a new artist.

Spalding was born not to a family of classically trained maestros, but rather to a single mother who worked mostly in non-music-related industries, including domestic services. But even with her humble background, Spalding is no blues artist. In fact, in her music Spalding speaks as much to poverty as Michael Jackson did of his low-income upbringing in Gary, Ind. -- which is to say, not at all.

Rather, when Spalding performs, she exudes supreme self-confidence. Take her performance of Stevie Wonder's "Overjoyed" at the White House in February 2009, at the invitation of President Barack Obama himself, and viewed nearly half a million times on YouTube. Spalding strides down the aisle to her upright bass, self-assured, almost oblivious to the queens and kings of democracy surrounding her, as if she were simply and merrily walking down the driveway to her mailbox. She commands her instrument, despite it dwarfing her, even in high heels.

When I saw her perform at Emerson Concert Hall, in the Schwartz Center in Atlanta last fall, she seamlessly transitioned between jazz, soul, funk, flamenco, samba and all manners of fusion that have yet to come to terms. Her swivel-step, ditty-bop stage moves during her upbeat songs made her come across more like an R&B artist, and her songs "Precious" and "Fall In," from her second album, Esperanza, could fit easily onto any Mary J. Blige CD.

Spalding is often referred to as the "future of jazz" -- often within the context that jazz has no future without her. But Spalding seems deeply connected to the past, though without venerating it. Take, for example, her recent release Chamber Music Society, which harkens to her days as the 15-year-old concert master of the Chamber Music Society of Oregon. While CMS plays to her classical roots, next year she will release Radio Music Society, which plays up her hip-hop and funk influences. In both titles, she uses media terms -- "chamber" and "radio" -- that speak more to bygone eras than they do to eras yet to come.

Unlike many traditional jazz/blues artists, Spalding doesn't embrace the idiom that says oppression-equals-blues-equals-blackness, which has swallowed so many African-American artists, from Nina Simone to Cassandra Wilson. Her ethnicities are apparent but are not the avatars for her identity. She may be as close to "post-racial" as we're going to get. That is worth celebrating, as she's able to musically express the fullness and complexity of humanity necessary to truly preserve a strong future for music.