At a crossroads in his life, Kevin Forsythe asked his father, Frank, for advice.

"He said, 'Kevi, you're nothing but a frustrated musician, and you're never gonna be happy until you do what you want to do,'" Forsythe recalls.

He didn't immediately heed his dad's advice. But that moment in 1988 foretold the day Kevin Forsythe, a lawyer, would become Slim Forsythe, "the singin', school bus-drivin' cowboy" of Lawrenceville.

His father had performed on Duquesne Showtime, a variety show on KDKA-TV in the early '50s, where he sang with local legends including Dormont country singer Slim Bryant. More than 50 years later, Kevin would adopt that name and start his own country band.

Though "Slim" began as just a stage name, it's really someone he's become. Forsythe -- tall and lanky, with a sly, dry sense of humor -- calls it "this 'Slim' thing [that] happened to me."

Coworkers and acquaintances only know him as Slim; few call him by his real name. "When it started out, it was kind of a shtick," he says in his characteristic drawl. "I didn't talk like this before, but now it'd be hard not to."

A writer, Forsythe dates his written output according to whether it was created before or after he started dropping the "g" in words that end in "-ing." In 2005, he'd just finished writing his fourth novel, Four Brothers, which he figured as a follow-up to Dostoevsky's The Brothers Karamazov.

"I asked myself, 'Now, what does a man do after he writes the sequel to The Brothers Karamazov?' The answer: I was gonna front an all-woman Hank Williams cover band," Forsythe says.

"We were embarrassed to be in a Hank Williams cover band, so we took stage names," Knauer says of himself and fiddle player Erin Snyder. "Big Rock and Candy Mountain, like the song" by Harry McClintock.

Nowadays, the band plays plenty of what Forsythe calls "classic country," from the '40s and '50s, alongside his own originals.

Straightforward and personal, Forsythe's tunes are full of nods to his past, his environs and people who mean a lot to him, including a song he wrote for his son, Sam, on his 17th birthday. (Forsythe's older son, Scotty, is raising a family in Seattle.)

But music wasn't Forsythe's focus as a younger man. Born in Pittsburgh in 1956 and raised in Bradford, Pa., he attended law school at Pitt in the early 1980s while dabbling in activism.

"I first worked with Slim when he was working with the Catholic Workers in the early '80s," says Knauer. (Forsythe would later manage Knauer's punk band, ATS.) Moving furniture together all day, "you get to talking a lot," Knauer says. "And I found that he was one of the most interesting people I'd ever met."

Parts of Forsythe's story sound like fodder for Hank Sr. While he's happy to open up on plenty of subjects -- his self-published novels, his many jobs (Zippo factory worker, assistant to former City Controller Tom Flaherty) -- others elicit a more recalcitrant response.

Forsythe bristles when Jimmy Nied, proprietor of Nied's Hotel in Lawrenceville, mentions Forsythe's time working with Mother Teresa at her House of the Dying in Calcutta. "Aw, Jimmy, we don't need to bring that up!"

Forsythe's affectionate but protective when speaking of his current girlfriend, and makes only fleeting references to his three ex-wives. He mentions moving in with his "favorite second ex-wife" from 2002-08 to be with his son; when Sam went to Penn State, Slim moved in above Nied's.

"It had always been my dream to live above a bar," he says.

Forsythe will occasionally croon a tune with Nied's house band; he plays with many configurations of musicians nowadays, including The Stillhouse Pickers (bluegrass), The Beagle Brothers (country) and surf-rockers The Surf Zombies.

Nied recalls story after story in which Forsythe has come through with a set when no one else could do it, or do it as well; once, he sang gospel tunes at the wake for a friend of the bar whose wife couldn't afford a proper funeral.

"And you always sing your way out of them," Nied replies.

In 2008 Forsythe, the lawyer who had just two years prior held a respectable position in city government, took his current job driving a school bus -- which he calls one of the best jobs he's had. Besides the bus and his family, music is Slim's life. He released his first full-length, Bury Me Up on That Northern Tier, in 2009, and is currently recording the follow-up.

"He worked for the government for a while, he went through some tough times," Knauer says, "and now he's turned his heartsickness and pain into a record. 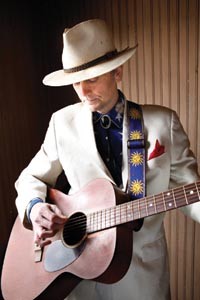