None of the characters is sympathetic, but all are interesting. 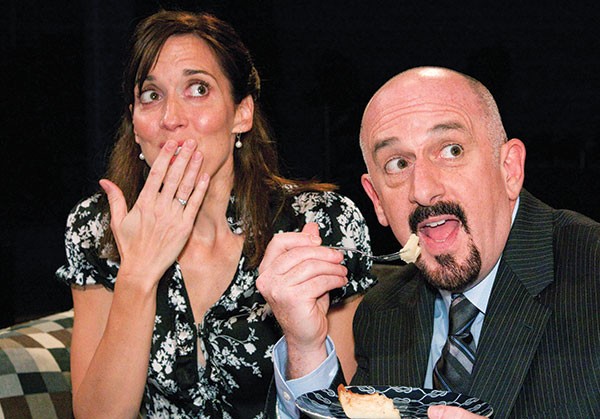 Yasmina Reza's plays are so irredeemably French that the best way to enjoy the English translations is to ignore the pretense that these sophisticated but non-litigious people could ever possibly be American. Given that inoculation, the Little Lake Theatre production of Reza's 2009 Tony Award-winning God of Carnage (neé 2006's Le Dieu du carnage) provides an enjoyable if rough-riding romp.

The premise is like that old joke about a fight between two children that ends up with their parents, trying to handle the situation "maturely," but falling into a series of insults and assaults. Carnage goes further into recriminations and repercussions, as the two sets of parents realign themselves to battle against everyone else singly and in strange political bedfellowships. Eventually fueled as much by alcohol as animus, the characters scratch and claw away their brittle bourgeois shells to reveal the raw pulp of pettiness, selfishness and inhumanity (or, to look at it another way, extreme humanity).

A single set, four actors of middle age — voila, a good piece for small theaters. Yes, be warned that Carnage (translation by Christopher Hampton) is often offensive, and not merely with the usual obscenities. It is a challenge that director Sunny Disney Fitchett and her cast meet well, with occasional brilliance and minor stumbles. (Let us hope that the frequent and distracting malfunctioning wardrobe has been rectified.)

None of the characters is sympathetic, but all are interesting. Mary Liz Meyer is appropriately over-the-top as the assailant-child's mother and insecure second wife of an overbearing lawyer (is that redundant?), solidly played by Art DeConciliis. Jennifer Sinatra embodies the bossy dilettante whose misplaced machinations lead to the stream of carnage. Gregory Caridi seamlessly morphs from nice-guy Everyman to a racist, sexist prig. Props to properties manager Leigh Ann Frohnapfel and to Brad Oberg for his assistance with effluent in that department.

These are not nice people, and God of Carnage is not a pretty place. But there's drama, plenty of laughs, and some provocative ruminations on the human condition.