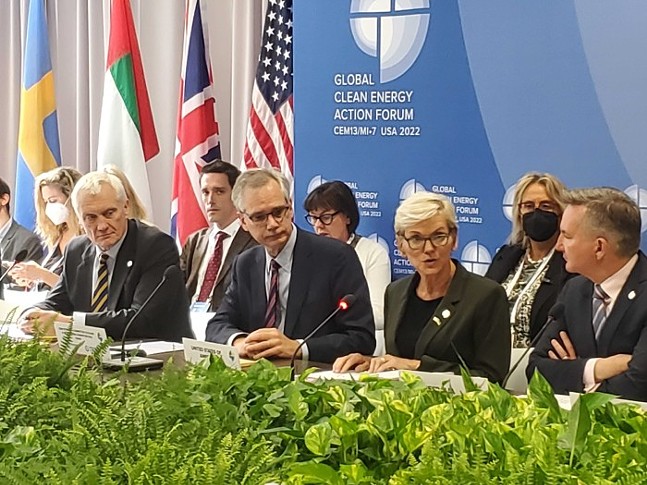 Six thousand global energy leaders have descended on Pittsburgh, where they hope to map out a future for the planet that avoids the devastating consequences of forecasted climate change.

The Global Clean Energy Action Forum, held Downtown in the David L. Lawrence Convention Center, is possibly the largest international conference to land in the city since the G20 summit in 2009.

It has been championed by local officials, graced by billionaire magnates, and scorned by hardcore environmentalists.

The two-day schedule that began on Thursday morning packs in more than 100 total sessions, each bringing together different specialists around the theme of clean energy.

“One of the primary objectives of his forum is to bring together the people that are taking action to make the clean energy transition happen, and that is in countries that are assembled here today,” Granholm said. “Each of us recognize that this transition is not only essential to overcoming climate change, it is also the answer to the energy security challenges we're all grappling with, and it's an opportunity to create millions of good paying energy jobs.”

Media were not invited to stay for the “working meeting” that followed the address.

U.S. Sen. Joe Manchin (D-West Virginia) is slated to kick off Friday's schedule with a "fireside chat" on barriers to large-scale private investment in clean energy.

The forum comes to Pittsburgh as the debate about energy continues to intensify locally. The hydrofracturing boom that’s brought jobs and investment to the region over the last decade is coming up against growing backlash from advocates who say it harms the environment and only lends short-term strength to the economy.

Examples include a council bill passed in July banning future fracking projects on Allegheny County parklands, and recent resident resistance to plans to drill for gas near a public school in Elizabeth Township.

Some of the public remains skeptical about the broader goals of the clean energy movement, which often promotes natural gas as a short-term ally in a longer fight for a green future.

On Wednesday, students marched through the streets of Oakland protesting hydrogen investments and carbon capture initiatives supported by the forum. The march was part of a larger series of protests of the forum led by local and national advocates, including a delegation from the Lummi Nation.

The following day, U.S. Energy Department officials at the forum announced a $7 billion investment in hydrogen, and, as the Pittsburgh Post-Gazette reports, local officials are lining up for a share.