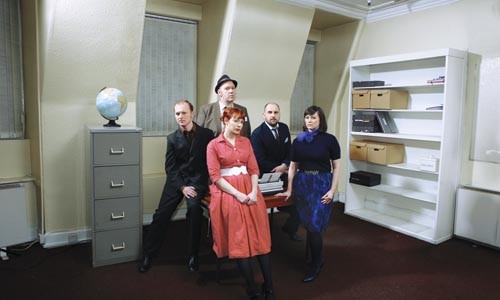 If sadness is beautiful, Camera Obscura's the pageant queen, infatuated with weepy desire and abject recovery. For more than a decade, the throwback Scottish pop act has been the knock-kneed girl in argyle and woolens, doodling her future between advanced-lit lectures, and daydreaming in a toilet stall rather than risking socialization and humiliation at the slow wit of her latest undeserving crush. Perhaps a prescription of some sort is in order.

Don't get the wrong idea, though. Camera Obscura may be delicate and awkward and so sweet you'd be temped to call her "honey" if not for political correctness (surely the very embodiment of twee). But songwriter and lead singer Tracyanne Campbell is no obtuse easy target. She's self-aware enough to know her artful suffering may have a shelf life, if only for self-preservation.

On the title track of April's My Maudlin Career (4AD), the band's fourth full-length, Campbell gently asserts, "This maudlin career has come to an end; I don't want to be sad again." Then she follows up with a song about unrequited love, and all fortitude is replaced with melancholy once more. As it should be.

"Some songs are so fragile, you have to be respectful of the music," says drummer Lee Thomson, speaking with City Paper on a cell phone from a Whole Foods in Austin, Texas. "We try not to overplay. ... We don't want to be a band who shows off playing guitar solos everywhere. We allow for the lyrics and the melodies to be heard."

My Maudlin Career is every bit as mawkish and adorable as fans would hope. The emotions have barely changed since the band's early days of getting mentor-ly production and props from John Peel and from Stuart Murdoch of Belle & Sebastian (Scotland's most successful export since whisky). My Maudlin Career is also quite accessible to newcomers who've recently acquired a taste for Spector-style girl-boy groups with Motown-tinged soft-country and bedroom confessionals.

When asked the inevitable question about influences, Thomson reports Camera Obscura is shaped by retro fashion as much as, if not more than, music.

"We honestly spend about as much time talking about our outfits' color coordination as we spend discussing the set-list before concerts," Thomson says. "We're all sort of obsessed with vintage clothes, and lately with the series Mad Men ... partly because of the era. The style, the clothes, the sets, everything is amazing."

The band is certainly not alone in its appreciation for the past. Over the last few years, similarly nostalgic sounds have reigned, from She & Him's exquisite Volume One and the Pipettes, to the Brunettes and whatever Jenny Lewis has been up to with or without the Watson Twins or Blake Sennett.

Lyrically, My Maudlin Career feels as much a travelogue as a Livejournal entry, with references to Portland ("Away With Murder"), Toronto ("Forests and Sands"), Cleveland ("The Sweetest Thing") and y'know, other towns and cities ("Other Towns & Cities"). Campbell wrote the album on the road, purging the pain after a particularly damaging relationship. Camera Obscura then recorded the album in Sweden of all places, with producer Jari Haapalainen. "It's a good thing for us to get away from home and concentrate on making a record with no distractions," says Thomson.

Indeed, Camera Obscura is the kind of band that spends more time playing for strangers around the world than performing as part of the Glasgow scene it's come to define. "We play Scotland once or twice a year, I guess," Thomson says. "When we return home it's always a bit scary because there's a lot of people we know. Parents and grandparents are there, and they're hard to please. Grannies can be tough."

It's diverting enough to bide the afternoon with Thomson discussing his grandmother and suggestions for vintage shops in Pittsburgh, a city never before visited by Camera Obscura. But where oh where is the elusive Tracyanne Campbell? While Thompson chats, Campbell, ever the coy, heartbroken heartbreaker, retreats from the discussion completely. She's famously soft-spoken and reticent in interviews, so this courteous snub is hardly surprising. And c'mon, would you really expect an eager, vivacious conversationalist from a woman who's made a career being so sadly beautiful?