Nathan J. Shaulis
Jaime Guerrero’s glass representation of Yanela Sanchez, a two-year-old girl featured in a viral photo where she was seen crying as her mother was searched by Border Patrol agents

The longer the current problems at the U.S. border continue, the more it produces horrifying images that make the news. Photos of families struggling to cross the border, young kids detained in detention camps, bodies of those who didn’t make it. They’re painful to see and hear, and while these images and videos and stories provide more information on the people bearing the burden of the border crisis, there’s still an anonymity to it all. These people are known more for what they endure than who they are as people, where they came from, and why they left. In his exhibit Cuando el Río Suena at the Pittsburgh Glass Center, artist Jaime Guerrero makes these migrants known with detailed, life-size glass sculptures that capture a delicate portrait of the children who have experienced it.

The exhibit, opening Fri., Oct. 4 and continuing through Jan. 26, 2020, features a collection of glass sculptures depicting migrant children, whether they made it across the border to the U.S., or if they’re being held indefinitely at a detention center. Another collection honors the children who died while migrating (at least seven children have died in immigration custody in the past year, while others have died while making the journey). The Glass Center exhibit, which Guerrero created during a nine-month residency at the facility, is his third on the topic of immigration, with two previous displays in his home state of California.

He used the previous exhibits as opportunities for visitors to share their stories of immigration, from South and Central America, as well as immigrant stories from all over the world. They wrote letters about their experiences, and a wall of them will be displayed at the exhibit, where visitors can continue sharing.

“I wanted to share with the public personal stories of why [they are immigrating] as an attempt to humanize these children's lives,” says Guerrero. “We don't know these kids' names, we don't know who they are or where they came from or what their backgrounds are or why they left. I feel it's a story that's missing.”

The sculptures of immigrant children, many of which are based on images of real people seen on the news, are made completely from clear glass, which helps Guerrero highlight the fragility of their lives in this situation, but also that, like glass, is not always completely visible. “They're visible as far as we hear in the news, but they're invisible as far as their personal journeys,” he says.” 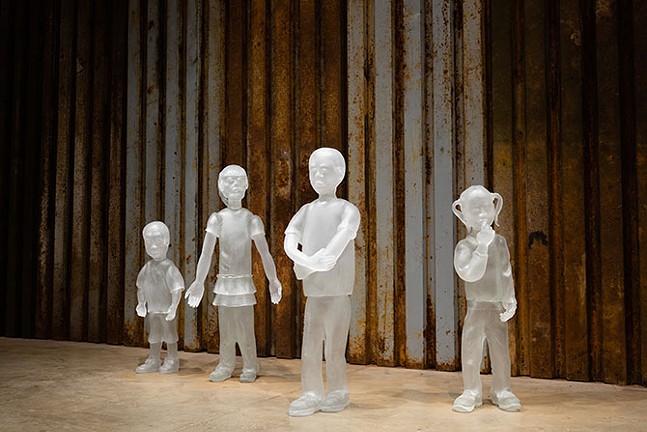 The children who have died are portrayed with angelic wings, made of opaque white glass, presenting them as guardian angels to those still making the journey. Besides glass, the exhibit will bring attention to immigrant lives with projected videos of some of the children, an area fenced in like a detention center, and a border wall.

Guerrero hopes the exhibit will fill in the gaps some people have in their knowledge about immigration, humanize the faces and bodies people see on the news, and provide context into why so many people choose, or are forced to, leave their home country. The title, Cuando el Río Suena, is part of a South American proverb, which in full reads “Cuando el Río Suena es porque agua lleva.” Guerrero says it translates to “when the river sounds, it is because it carries water” — a similar meaning to the English expression, “when there’s smoke, there’s fire.” In other words, danger is coming, or already here.

It came to Guerrero around the time an image went viral of a man, Óscar Ramírez, and his two-year-old daughter, Valeria, who drowned while trying to cross over the Rio Grande into Texas. “I thought the title was very appropriate to think of the horrific dangers that these desperate people seeking asylum have to endure, or in this case not endure, because they didn't make it,” he says.

The river has always carried water, but with Guerrero’s exhibit, we might at least get to know its victims.