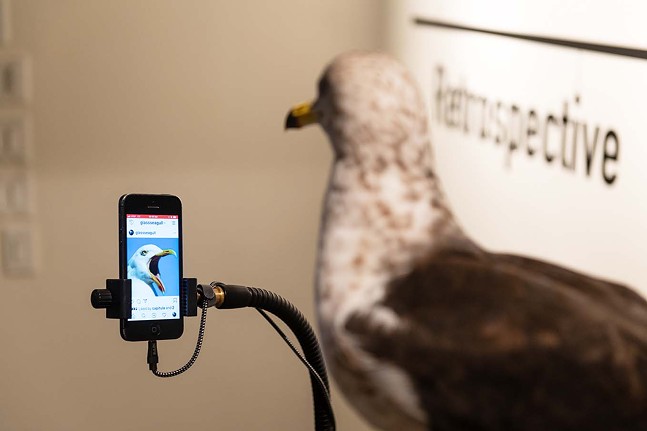 Due to its fragility, glass is not usually seen as a playful or interactive medium. There is always the lingering childhood fear of breaking your mom’s favorite vase. But a new exhibit at the Pittsburgh Glass Center (PGC) upends that feeling.

Idea Furnace Retrospective features the work of 17 artists who completed PGC’s Idea Furnace program, which allows non-glass artists to try their hand at the medium with the help and instruction of glass artists. The exhibit, on view through July 29, highlights work from artists who poke fun at social media, pay tribute to forgotten history, and explore the limits and functions of the medium.

The first pieces visitors see when entering the exhibit are part of sculptural artist Joshua Reiman’s “Extreme Vanity” series, featuring three works meditating on the human ego and its relationship to social media. “#glassseagull” features a taxidermy seagull perched atop rock-shaped glass and staring at an iPhone running an endless loop of its Instagram feed. He writes in his description that he chose a seagull as a human stand-in because, like humans, it will “steal food, raise a family, shit everywhere, and glide around everybody else.” Another Reiman piece lets visitors stick their head through a hole in a table to be surrounded by four shining glass heads.

Sound artist Ranjit Bhatnagar's piece achieves the tricky task of making instruments out of the glass. The "Urchin Drums" sit stationary on the shelves, but visitors can put on headphones and watch a video on an iPad of the drums being played.  (Not having the visitors play the drums themselves is probably a good call.) The work plays with the notably "unmusical" qualities of the hollow glass sphere.

One of the most visually striking pieces in the collection is an installation honoring the Radium Girls of the early 20th century, female factory workers who contracted radiation poisoning from the luminous paint used on watch dials. Created by writer and artist Savannah Schroll Guz, the piece began in 2012 as a short story, then a graphic novel (an excerpt hangs next to the glass work), and at the PGC, an open casket with the radium-green glass body of a woman dressed in a beaded green quilt. It’s a more noble burial for the many women whose deaths were often blamed on other causes like syphilis before the companies involved admitted the damage done by their product.

Because the artists involved with the exhibit had never worked with glass before, many of the pieces are experimental, as if they were testing out the limits of the material and seeing how it can expand their personal craft. Braddock-based abstract sculptor Alyssa Kail used the opportunity to create a self-portrait capturing changes in her life, centered on a particularly meaningful haircut. Two glowing glass powder printed portraits sit on either side of a severed glass braid, lying on a table like an altar offering. Alisha Wormsley, another local artist, is known for working in an array of forms, from film to collage. Her pieces involve stained-glass geometric shapes, framing portraits of Black women like a shrine. In her statement, Wormsley says that she likes trying new mediums because “it’s like traveling interdimensionally.”

All of the labels for the artwork are written by the artists and explain their intentions, inspirations, and how they handled the process of making art out of unfamiliar material. It makes the gallery feel more welcoming to see that even these experienced artists can try something new without knowing how or if it will work out. Most of the pieces in the gallery are not for touching, but at the front, there is a table with imperfect glass pieces and molds — glass spoons, a disembodied leg — for visitors to touch and examine. It’s all part of the learning process.