Giving a Voice: "Queer and Brown" podcast sparking conversation for a marginalized community

"The heart of the podcast is a love of queer people of color." 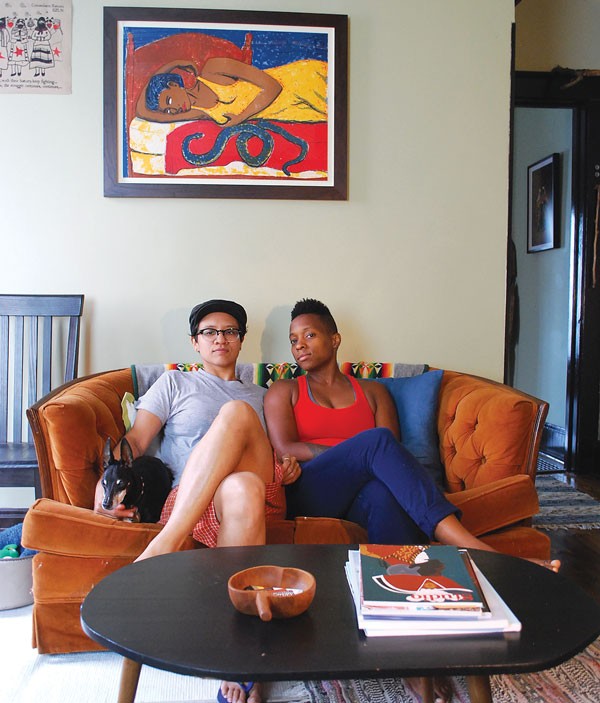 Ayanah Moor and Raquel Rodriguez have a cozy living room, big enough for a cocktail party but small enough to keep all its occupants in listening range. A compact loveseat sits before a coffee table, and a glass breakfast table stands in a corner.

Some of the art on the walls is from students taught by Moor, an associate professor of art at Carnegie Mellon. The scents of sandalwood incense and tea filter through the air. A toy Manchester terrier, Pepper, approaches guests with a tennis ball, and two cats sometimes make an appearance. The Highland Park couple is careful to put down a coaster before offering visitors a drink.

The atmosphere of the living room is so critical to their podcast, "Queer and Brown in Steeltown," that for the only episode not recorded there, they took their rug and coffee table, along with a stack of books to adorn it, and reassembled the setup at the Rhinestone Steel music festival.

"We don't want to turn this into a news show," says Rodriguez, a freelance graphic designer. "We want it to be conversational. The goal is to put out there the kinds of conversations we were [already] having, to provide an outlet for voices that are often marginalized."

Most of the 17 episodes feature a guest who is — like the hosts — a Pittsburgher who falls under the LGBT and person-of-color umbrellas. But this podcast is not strictly about queerness and brownness; it's about queer, brown people. Artists, academics, musicians and others discuss their crafts and vent their frustrations.

In one of its most interesting moments, Pitt librarian Elvia Arroyo-Ramirez shared her ambiguity about a field she loves but which puts her in the service of a "privileged class." In another episode, aspiring graphic designer Briizy Maraj spoke gushingly for 30 minutes about the Port Authority buses he longs to redesign.

Yet for the podcast's guests, the political is never far from the personal. Arroyo-Ramirez recalled her immigrant, meatpacker parents' lessons on social mobility. ("They instilled in me, ‘If you bust your ass in school so you don't have to do this unskilled labor and you don't have to endure this physical exhaustion we go through every day to put food on the table, then that is success.'") Maraj recalled his fear of coming out as a Homewood teenager. ("I played video games just to keep my mind off of everything. I stayed inside the house and barely went outside.") And DJ/guitarist Theo George revealed his anxiety about profiling as he transitions from a black woman to a black man. ("When I was in the car with my black male friends, we were pulled over non-stop. We couldn't even drive anywhere.")

From immigration to bullying to stop-and-frisk to Trayvon Martin to same-sex marriage, the major news issues of the '10s are probably more likely to impact someone who is queer and brown than someone who is neither, and that helps make "Queer and Brown in Steeltown" effortlessly topical.

Moor and Rodriguez started the show in May 2012 in response to the profusion of magazine and Internet stories declaring Pittsburgh one of the country's most livable cities.

"I thought, ‘Most livable for who?'" says Moor. "You can't call one of the most segregated cities in the U.S. one of the most livable!"
They point to East Liberty as a representation of that disconnect. Target, Staples and Trader Joe's stand as beacons of "revitalization" for some, while the small businesses on Penn Avenue struggle and neighborhood stand-bys, like Shadow Lounge, go under.

"That's gentrification," says Rodriguez. "We move some people elsewhere and call that ‘livability.'"
The podcast was meant to provide alternative narratives to that of Forbes-defined "livability," but that's not the only reason its hosts keep their living room open and equipped with a microphone.
"The heart of the podcast is a love of queer people of color," says Moor. "Gentrification could end tomorrow and we'd still do the podcast."