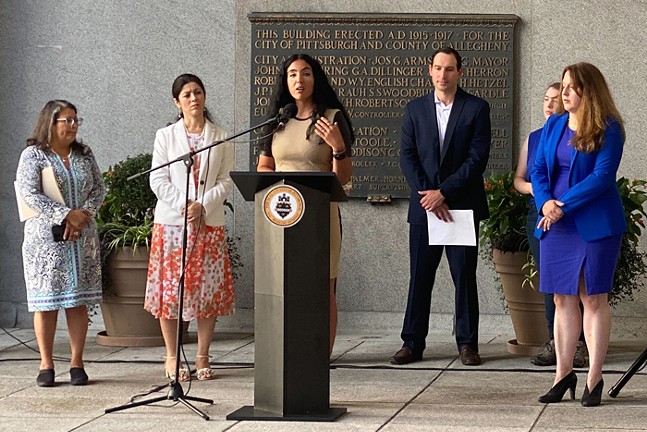 Fetterman was joined by advocacy group Casa San Jose and representatives from the American Immigration Lawyers Association in urging officials to consider reopening the Pittsburgh court, which was abruptly closed in April, leaving many families confused. The court served people across Western Pennsylvania and West Virginia.

“It’s so backwards that something that has been around for so long has now suddenly been removed without being offered an alternative,” says Fetterman.

The second lady told how she was a former dreamer in this country who once had to navigate the difficult system of immigration.

“First, I’m here as a former dreamer, someone whose family fled violent positions to start a new life in a new country and call it a dream, that so many others are doing,” says Fetterman. “I’ve had to navigate the very difficult systems of immigration, but I had a court to go to.”

The Pittsburgh immigrations court docket currently holds more than 3,000 cases that impact 6,000 to 10,000 people from the western Pennsylvania and West Virginia areas.

Katy Lewis, an AILA member with Mountain State Justice in Morgantown, W.Va., expressed some of the struggles her clients are already facing in her state.

“The biggest issue for our clients in West Virginia is how far away Philadelphia is. For some people, we’re talking a 10-11 hour drive each way. Most of them don’t have driver's licenses and, even if they could afford to travel to Philadelphia, there are no public transit options for them,” says Lewis in a press release.

At the rally, Lewis also emphasized how West Virginia lacks statewide broadband infrastructure, so a lot of people in the state are prohibited from participating in virtual options.

“We’ve already seen instances where people who lack the technical and language skills to connect virtually are struggling, and the government hasn’t been doing an effective job of communicating the change in these appointments, many of which have been set for months,” says Aila.

Irma Domingo Cax, a speaker at the event who is a mother of two and is originally from Guatemala, is one of those impacted people.

“It’s very important that the court should be here because going to Philadelphia is too far and you have to pay for the trip and you lose a day of work,” Cax told Pittsburgh City Paper during a later interview.

Cax originally had a hearing scheduled at the Pittsburgh immigration court for months in advance, but it was recently moved to Philadelphia due to the closure of the local court.

Feyi Akintola, of the city of Pittsburgh’s Office of Immigrant and Refugee Affairs, expressed concern about the effects of the court's closure on the local population in the city.

“If a solution isn’t reached in the short term, I am concerned about the implication for our residents and their families," Akintola said. "Our goal as an administration is to create a safe, welcoming city, where all of our residents can live and thrive and we are committed to working with the community and other elected officials to continue to advocate for action to address this issue in order to make this goal a reality for everyone.”