“I learned a lot of stuff, as a person and a writer, the hard way.” 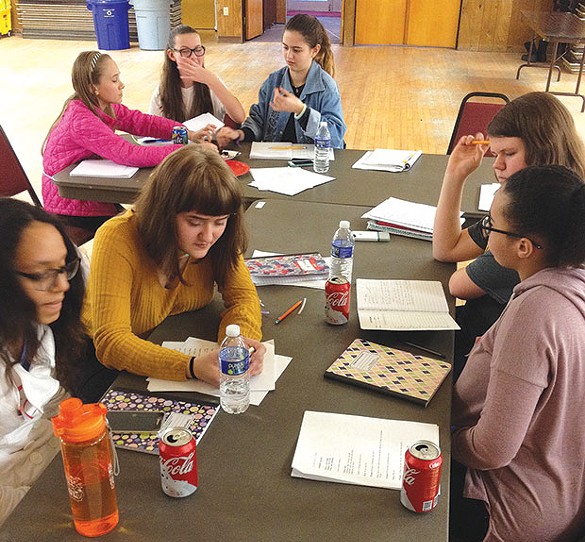 Writing it out: A Girls Write Pittsburgh quarterly workshop

Thirteen-year-old Maddie Nolan read the poem she had written in class that day — an “ode to an ode” as she called it — a swirling vocal exercise that brought to mind a poetry slam, with its internal rhymes and alliteration reminiscent of Lin-Manuel Miranda’s Hamilton lyrics, of which Maddie is a huge fan.

She read it at the weekly meeting of Girls Write Pittsburgh, a program designed to empower at-risk teenage girls through writing and self-expression. The all-female group applauded when Maddie was finished, and her demeanor was confident; clearly, it was a safe space where she felt relaxed.

Girls Write Pittsburgh was the brainchild of local writers Vivian Lee Croft, Andrea Laurion and Sheena Carroll, who say their personal experiences as teenagers left them yearning for more like-minded creative people to share their work with.

“When I was a teenager, my life started to fall apart, and writing was my outlet,” Croft says. “I lived in a small, conservative town and I was very different. I had no friends to collaborate with or even discuss what I was thinking.”

The group meets every Wednesday at the Brookline Teen Outreach Center, and will be starting a second group in Garfield in May. Any girl, age 13 to 18, is eligible to join. New Sun Rising is Girls Write Pittsburgh’s fiscal sponsor, and Girls Write was the recent recipient of Barrelhouse Magazine’s Amplifier Award for emerging literary organizations, which was co-sponsored by Submittable, a submission-management software company.

The team of volunteers coaches the girls, gives them feedback and editing suggestions, and talks about how and why they write. They also plan workshops and other events to expose the girls to cultural experiences they might not otherwise have, like an upcoming trip to The Andy Warhol Museum.

On this Wednesday night, 17-year-old Kaitlyn Shay left the room while Maddie read one of Kaitlyn’s poems. Kaitlyn doesn’t like to read her own work aloud or hear it read, but she’s come a long way from where she began with the group, Croft says. “She didn’t even want to write anything.”

Kaitlyn’s poem was deep and thoughtful, if a bit somber. The experience of writing and digging deep for creative inspiration tends to dredge up a lot of emotion, the leaders say, something they encourage, but are also sensitive to. They have a therapist who works with the group and offers guidance for the heavier issues.

The group was inspired to try writing poems after receiving tickets to a March lecture in Pittsburgh by writer Roxane Gay. “At first, they weren’t sure they could do it,” Laurion says, but several girls, including Maddie and Kaitlyn, discovered they had a real talent for poetry.

Since the group leaders aren’t teachers, the dynamic they have with the girls is a little different than with the usual authority figure. “We can be vulnerable in ways that I think a lot of teachers can’t because they have to be that authority figure and have that removed,” Laurion says. “I remember being a kid; it’s so important to have adults in your life who take an interest in you and are enthusiastic to be with you and want to help you.”

Carroll says a lot of her motivation comes from wanting to spare the girls the difficulties she had growing up. “I came from a low-income home, and a low-income school district, and we didn’t have programs like this,” she says. “I learned a lot of stuff, as a person and a writer, the hard way. I don’t want them to learn in a way that is unnecessarily difficult, whether it’s writing or them not being able to express themselves.”

Girls Write Pittsburgh is also working on starting a one-on-one mentorship program for girls who want a little extra instruction. They plan to launch it in May. In the meantime, Croft and Laurion will start the Garfield group, while Carroll continues with the Brookline girls.

Putting things on paper can be scary and frustrating, but Girls Write Pittsburgh provides feedback and critique of some very raw emotions at a crucial point in the girls’ lives.

“We just allow them to explore and find where they’re comfortable,” Croft says. “These young women who are facing shit can just come and feel like they’re safe and feel like it’s OK to express this and work through it. They can grow to become the writers they want to be.”