Girls Only — The Secret Comedy of Women

The two performers zap popular (if impossible) images of women, share their real schoolgirl diaries, and mine the laughs in life from puberty to menopause. 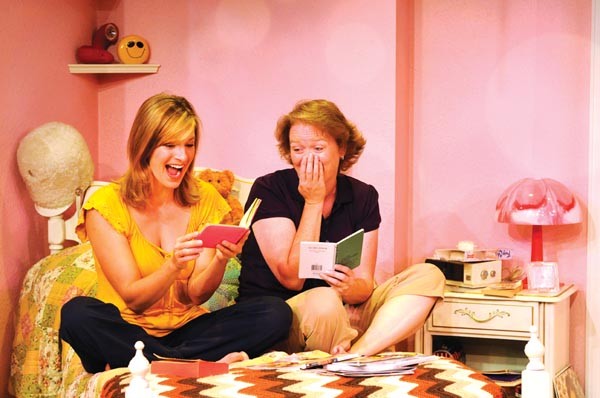 GIRLS ONLY — THE SECRET COMEDY OF WOMEN

I still have my copy of Titters (Collier Books), the groundbreaking 1976 anthology dedicated to knocking the long-held proposition: "Chicks ain't got no sense of humor." And as the ladies behind Girls Only — The Secret Comedy of Women would say, looking back is a good way to see how far we've come. The two-woman, Denver-based traveling show has landed at the Pittsburgh CLO Cabaret Theater for a long, laugh-filled run with a decidedly feminine POV; i.e., no mention of flatulence, mother-in-law "jokes" or other ill manifestations of machismo.

Show creators Barbara Gehring and Linda Klein have, since 2004, polished the two-act revue into a tight series of skits, improvs, songs and multimedia segues to cover costume changes. Mostly playing themselves, the two zap popular (if impossible) images of women, share their real schoolgirl diaries, and mine the laughs in life from puberty to menopause — though always with feminine delicacy. No naughty words to make Granny blush. There's also remarkably little male-bashing. (Hooboy, can you imagine the misogyny filling a by/for men show?)

It's unfair to give away punchlines, but let's just say that the jokes are inspired by purses, what's in purses (including, um, "feminine products"), showers and women's history. (Excuse me, guys, but the 18th Amendment, a.k.a. Prohibition, came before the 19th.) Director Claudia Carson, with Girls Only since 2008, is ably assisted by local designers Tony Ferrieri and Andrew David Ostrowski, respectively designing set and lights, and production stage manager Tim Brady. Gehring and Klein perform the show through July 1, when local actors Christine Laitta and Theo Allyn take over for the remainder of the run.

Do show up early to peruse the bulletin board of Gehring's and Klein's memories. And don't worry about bringing along male companions. The humor is broad enough to tickle their fancies, too.