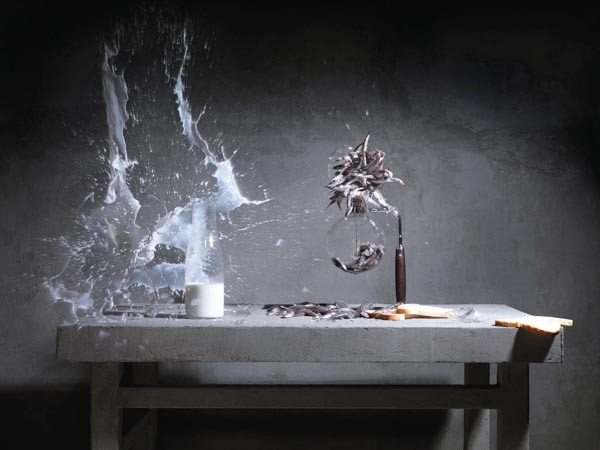 The Old Blasters: "Bullet#3001," by Rachel Nieborg and Ine Mulder.

Girls 'N' Guns is catchy, as any good title should be. Yet while a majority of the 14 color photographs in Rachel Nieborg and Ine Mulder's exhibit do involve gunplay within a broader theme of referencing and shattering the 17th-century Dutch still-life tradition, the show is more varied than its title indicates.

The heart of the 709 Penn Gallery exhibit is photographs of still lifes carefully arranged before being disrupted by a bullet blasting through the scene, sending shards and liquids flying. These images rework rather than recreate the still-life tradition. Horizontal in format, they feature a cast of unprocessed foods — fish and fowl, eggs, produce, bottles of milk and wine — that suggest a connection to the past. These sit alongside up-to-date stuff such as concrete tables, industrial beakers and, not surprisingly, a gun. With the works hung on not-quite-blood-red walls, the mood is anything but historical/contemplative. Nieborg and Mulder's photographs — one shoots the gun, one shoots the picture — stand firmly in the present in format (large-ish, glossy color photographs float-mounted without frames) and in mood, with a 21st-century bent for the strongly stated, the hybridized, the performative and the transgressive.

I suspect that for the Dutch, still life is a broad trope that can be accessed without delving deeply into it, much as an American might reference "cowboy" or "hillbilly" or "corrupt politician." Nothing in this work or in the artists' statement suggests a profound engagement with the cultural past, though it's hard to deny the Oedipal aspect of disrupting tradition to clear additional space for something new. Too, there's more than a hint of feminism in a project in which young women wreak havoc on a male-dominated art genre. Gleefully, it appears.

Still life's been pretty stultified since, say, Picasso, though it lives on in a big way in advertising photography, which is a ready association here, right down to the black Plexiglas backdrops widely used in that field. The materials of tabletop and background feel carefully selected and controlled. And the choice of objects within each picture has some logical consistency of material (ducks' heads, grapes and splattering red wine in "bullet #2803") or of form (spumes of splattered milk visually rhyme with a spiky cluster of small fish in "bullet #3001").

Nieborg and Mulder's still lifes are arranged with an eye to their destruction, with  pride of place reserved for eggs, lightbulb, red paint, carafe of wine, Delftware pitchers and bottles of milk — that is to say, things that splatter well. The mood of tabletop and background is somber in gray and black, contrasting with brightly colored and exuberantly exploded items. There's also a memento mori melancholy in bloody chopped-up fish and surprisingly expressive duck heads; soon enough, we will be joining them.

In "Shot3" and "Shot4," the supporting tabletop of glass has been exploded such that what sat on it was captured in mid-air by the camera, falling so fast that everything's blurred. While most of Nieborg and Mulder's still lifes call to mind Harold Edgerton's experiments with strobes, in which he captured the image of an apple or playing card with a bullet slicing through it, "Shot3" and "Shot4" suggest a destructive energy more akin to an earthquake than to a studio-based strategy.

The performative in photography goes back to Oscar Rejlander staging allegories that spoke to the Victorian imagination. In recent decades, art photography has often been dominated by the staged, from Jeff Wall's slices of implied narratives to Cindy Sherman's resonant personas. While related, the performative is a bit different, with, typically, an outrageous action executed for the purpose of photographing it. (Recall Kerry Skarbakka's "falling photographs" at Pittsburgh Filmmakers in 2010.) In the art of the present, the disruptive and the highly dramatized trump the stable and the centered.

From giant-pumpkin drops to school-bus demolition derbies, the thrill of destruction has recognized entertainment value. Girls 'N' Guns seems more playful than political, though it's hard not to make some association to what goes down daily in the United States of the NRA. Of course, Nieborg and Mulder are distinctively Dutch, not American.  (And a tip of the bonnet to the Pittsburgh Cultural Trust's Distinctively Dutch Festival for presenting this show.) Besides, guns don't kill, people with guns kill. And sometimes people with guns make stylish, amusing art — though the idea of shooting stuff might feel less business-as-usual in the Netherlands, where there's little gun ownership. At least Nieborg and Mulder don't claim that they shot that bottle of milk in self-defense.