The range spans tastes from citrus to a range of botanicals 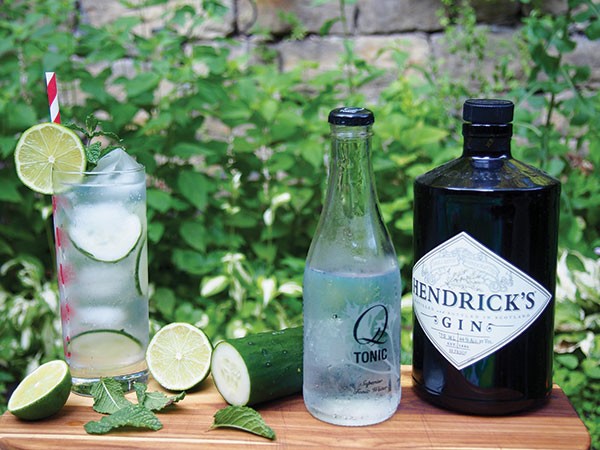 CP photo by Drew Cranisky
A gin-and-tonic, garnished with cucumber, lime and mint, is a refreshing summer cocktail.

One night, deep down the Wikipedia rabbit hole, I stumbled upon a memorable print by British artist William Hogarth. It depicts a grotesque scene of London in the 18th century, its denizens driven to prostitution and violence. A beggar tries to wrestle a bone from a dog. A child careens headfirst toward the ground, falling from the lap of his careless, syphilitic mother. A madman marches through the streets waving a baby impaled on a pole.

The cause of this suffering and mayhem? Why, it’s gin.

In its comically outsized way (the Georgian version of clickbait), “Gin Lane” addressed the very real problem of rampant alcohol abuse among England’s working classes. And while few these days worry about skewered infants, gin is still a woefully misunderstood and underappreciated spirit.

When most of us consider gin, we likely think of the London Dry versions: crisp, clean spirits with a pronounced juniper flavor (think Beefeater and Tanqueray). These gins have been prized for years, the ideal choice for a proper, potent martini.

For some, however, the sharp pine flavor of the style is a total turnoff. Not to worry. The U.S. government defines gin as “spirits with a main characteristic flavor derived from juniper berries.” This rather vague definition leaves distillers ample room for interpretation. In 1999, a Scottish company found wild success with Hendrick’s Gin, a softer spirit that features cucumber and rose petal. Many American distilleries followed suit, crafting gins that bring other flavors, from citrus to flowers to a range of botanicals, to the forefront.

Here in Pittsburgh, Wigle Whiskey has long experimented with gin that departs from the London Dry model. Wigle’s Ginever is a take on Dutch genever, a thick, malty spirit that is worlds away from Bombay. Though most gin is unaged, the Strip District-based distillery has released several aged versions, including iterations that spent time in tequila and barleywine barrels. And this December, Wigle will debut Tomfoolery, its spin on Old Tom gin: a slightly sweet style that lands somewhere between genever and London Dry.

Though many gins are wonderfully complex and layered, it’s the rare drinker who sips gin like scotch or cognac. Gin’s popularity has instead been boosted by the craft-cocktail renaissance, where it provides the backbone of countless classic and modern cocktails. It is as useful in refreshing drinks like a Tom Collins as it is in strong, stirred drinks like a Last Word, a pungent combination of gin, maraschino liqueur, green Chartreuse and lime. For a crash course, head to Spoon’s gin club. Each Thursday, the East Liberty restaurant features a special menu of classic cocktails built from its library of more than 50 bottles of gin.

Whether you like piney, citrusy or malty, there is a gin out there for you. Find it, grab some tonic and limes, and celebrate the perfect summer drink — William Hogarth be damned!