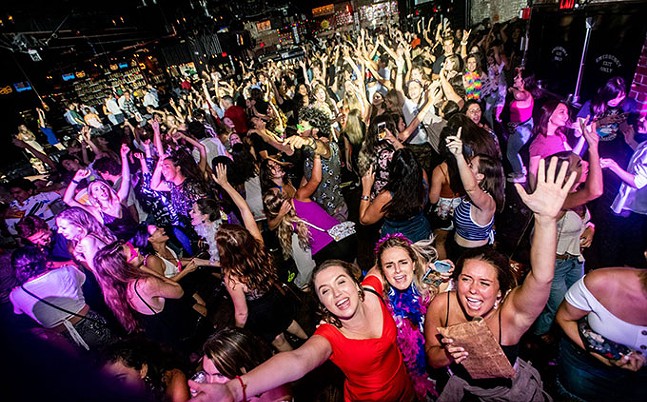 But don’t tell that to Ethan Maccoby, co-founder of the ABBA-themed Gimme Gimme Disco touring party. The event, which launched a little over a year ago, will make its first-ever Pittsburgh stop on Fri., Feb. 21 at the Thunderbird Café & Music Hall in Lawrenceville.

“There’s a huge, huge scene of people both old and young that love this music,” says Maccoby, whose events company, Burwood Media, has brought Gimme Gimme Disco to venues throughout the country.

Maccoby claims Gimme Gimme Disco started playing to sold-out crowds at various New York City clubs, quickly having to move from the 200-person capacity Mercury Lounge to bigger venues like the Brooklyn Bowl and Gramercy Theater. The early success spurred him to take the party on the road to “spread the disco love.”

While disco music peaked in popularity in the 1970s, Maccoby says Gimme Gimme Disco parties have attracted a broad range of ages and demographics, from 18-year-olds up through 50 and above. He believes a big part of the genre’s resurgence is owed to the 2008 film Mamma Mia! and its sequel, which are based on the ABBA jukebox musical of the same title.

As a big fan of disco, Maccoby says he and Burwood Media wanted to create a space where people could enjoy music by the hugely popular Swedish band as well as other disco artists.

“Obviously, disco is such a loved genre and it’s hard to find a place where you can just go out to a random bar and hear all of your favorite songs and dance to them,” he says, adding that many theme dance parties now focus on the 1990s or early-2000s as a way to cater to 20-something partygoers.

That desire extends to local dance parties as well, primarily the Jellyfish queer dance party that, since its 2017 launch, has been spinning European disco and disco-influenced music at P Town bar and other venues.

The return of disco dance parties also aligns with a renewed interest in examining why disco was declared dead in the first place. Historians and journalists like Alexis Petridis, who wrote an article titled “Disco Demolition: the night they tried to crush black music” for The Guardian, point to how sexism, racism, and homophobia played a role in the so-called “Disco Sucks” movement because of how the genre elevated Black and Latinx artists, female artists, and artists who openly identified as LGBTQ.

Despite efforts to kill it once and for all, however, Maccoby agrees elements of disco live on in modern music, including dance-focused genres like EDM and pop.

As for the Pittsburgh show, he’s looking forward to seeing people come out, preferably decked out in their finest disco duds.

“We’re excited to enter [the] market and see what the reaction is,” says Maccoby. “Hopefully, this is just the first of many stops in Pittsburgh.”